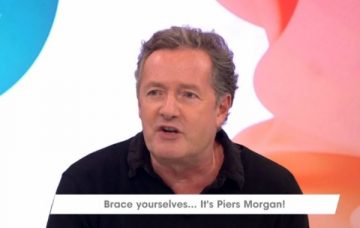 Controversial presenter had something to get off his chest

Yesterday’s Royal Wedding was a spectacular occasion, and the bride looked absolutely stunning.

Just hours after the wedding of the year had drawn to a close, the Mail On Sunday published the controversial TV presenter’s views on Harry and Meghan’s big day.

And the 53-year-old is sure to ruffle a few feathers after he appeared to cast doubts on the latest addition to Britain’s most famous family.

Piers has previously revealed that he played a part in bringing Harry and Meghan together.

Last week, alongside a picture of The Scarsdale Tavern in Kensington on social media, he boasted how he’d been drinking with the US actress in the pub prior to her first date with the prince.

He wrote: “Two years ago, I took Meghan Markle to my local pub for a drink (she had dirty martinis, I had Harvey’s best bitter) & then put her in a cab to her first date with Harry.

“That night, none of the locals knew who the hell she was. It appears they know now…”

However, Piers – who was not invited to the Royal Wedding – seemed to have a few reservations about Meghan as he summed up yesterday’s proceedings.

The Good Morning Britain host wrote: “If you were choosing a wife for Harry, you probably wouldn’t start with a 36-year-old divorcee whose family are so bonkers she could only risk inviting two of them to the wedding – and one of those was a no-show.

“As I watched, my mind kept going back to one uneasy question: how can you justify having NONE of your family at your own marriage when you’re filling the church with famous people whom you’ve known for a fraction of the time?

“It smacked of ruthless and rather distasteful social climbing by a woman who was absolutely delightful when we met in my pub, but whose life has been marked by a worrying tendency to ditch people when they cease to be of use to her. (Her first husband thought they had a happy marriage until the day that Meghan sent his rings back in the post.)”

Despite Piers’s apparent misgivings, he did admit that Meghan looked “beautiful” yesterday, and generally seemed to give the wedding the thumbs-up.

We’re sure Harry and his lovely wife will be very grateful.

Do you think Piers’s comments are fair? Have your say on our Facebook page @EntertainmentDailyFix!