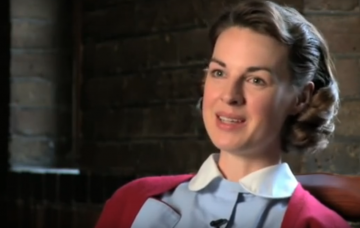 Actress has become a mum for the first time, report claims

Jessica Raine has become a mother for the first time, according to a newspaper report.

The Call The Midwife star, 36, is believed to have given birth, having only confirmed her pregnancy in January.

Photos published by The Sun’s website show the actress pushing a pram while out shopping – and the news outlet claims it is her newborn tucked away inside the buggy.

The images – seemingly of Jessica out shopping at a supermarket with husband Tom Goodman-Hill – are believed to have been taken earlier today.

The Jenny Lee star only recently revealed she was expecting, during a Q&A event for her new BBC drama Baptiste.

She admitted to ‘neglecting’ to inform TV bosses she was pregnant when she accepted the role of Genevieve.

Jessica told The Mirror at the time: “I was a bit tired but the worrying thing for production was there was a car race and stunt and I neglected to tell them I was pregnant when I took the job.

“I broke the news and everyone was amazing. We had to work out how to do a car chase without me being in any danger.

Read more: Dancing On Ice bosses ‘panicking over whether Gemma Collins will be ready for final’

“Also, my character is quite hard and being pregnant is quite emotional so it worked well.”

In 2013, she said working on Beeb hit Call The Midwife had made her feel broody.

She told the Evening Standard: “You’re waiting around a lot for lighting, so if there’s a baby you can coo over it’s just lovely.”

However, she said at the time she was “too busy” to have children or get married.

Jessica and Tom moved in together that year before getting married in 2015.

They first met in 2010 when they were both cast in a 2010 production of Earthquakes at the National Theatre.

ED! has contacted a representative for Jessica for comment.