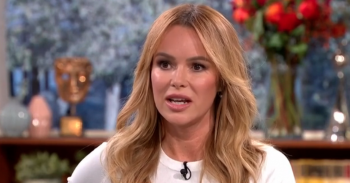 Will we see a new look on Britain's Got Talent?

Amanda Holden could be changing up her look for the upcoming series of Britain’s Got Talent.

The reality telly judge, 48, is reported to have made alterations when it comes to her wardrobe selections after a racy outfit she wore in a previous run of the ITV talent show pulled in nearly 700 complaints from viewers.

According to the Sun’s website, Amanda has ‘dropped’ her stylist after the 2017 fashion disaster which also saw her revealing dress slammed by some fans as making her ‘look like a stripper’.

A anonymous TV insider is reported to have said: “Amanda has decided to freshen up her wardrobe and her look for this year’s show but that doesn’t mean she’ll be any less sizzling.

“She’s still going to shock audiences when she comes out on stage but possibly in a different way.

“Amanda loves her fashion and dressing up is definitely part of the fun of the show.”

It is believed that 663 complaints were lodged with Ofcom after the semi-final episode aired in June 2017.

Only Corrie’s Pat Phelan serial killer storyline and Russell Brand swearing before the watershed pulled in more protests from viewers.

Amanda’s plunging Julien Macdonald gown entranced many viewers – but there were also critics on social media who did not hold back with their dismissive comments.

“Does Amanda Holden realise she sets an example to young girls and women – stop dressing like a stripper?” tweeted one fan at the time.

“Amanda Holden branded a ‘stripper’ I reckon that’s an accurate description,” alleged another.

ED! has approached representatives for Angie and Amanda for comment.

Can’t wait for you to see this incredible talent and absolute carnage 🙈 We’re coming back to your screens next Saturday 6th April at 7:15pm pic.twitter.com/1BZpPTib5s