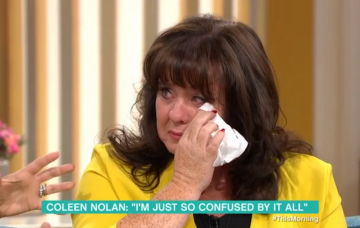 She can't cope with the trolls

Coleen Nolan has postponed her solo tour, as she struggles with the backlash from THAT Kim Woodburn reunion.

Her reps have issued a statement explaining her reasons.

“Following the constant online bullying, trolling and misrepresentation of her words and reactions, it is with sad regret that Coleen is taking an immediate hiatus form all her current commitments including Loose Women and postponing her Never Too late solo concert tour,” it reads.

Earlier today we revealed she would be taking a temporary break from the Loose Women panel when her first-ever solo tour kicks off.

The 53-year-old will hit the road with her Coleen Nolan: Never Too Late tour in January, marking the first time she’s toured without The Nolans.

In a new interview with Woman’s Own, the singer said she’ll have to take a break from Loose Women as she wouldn’t be able to appear on the panel while she’s touring the country.

She explained: “Obviously I’ll have to take a break from Loose Women. I can’t be as regular on it as I am now because I will be in Scotland, Wales, way down south. It will be impossible to be on the show two or three times a week.

“But hopefully I can pop back when I’m near enough or we can do live link-ups when we need to.”

Coleen joked the other panellists will “probably be delighted to get a break from me.”

The television star will kick off her tour in Manchester on January 11, 2019 and continue through until a final show in Blackpool on February 28.

Full dates and ticket details can be found on her official website here.

It’s been a mixed week of emotions for Coleen from the high of announcing her first-ever solo tour to breaking down in tears on This Morning over last week’s TV clash with Kim Woodburn.

Coleen and Kim, 76, had a frosty reunion on Loose Women arranged by producers in the hopes they could bury the hatchet following a falling out on Celebrity Big Brother last year.

However, it didn’t go to plan with Kim storming off set upset and Coleen being accused of “bullying”, an allegation she vehemently denied.

A tearful Coleen told Holly and Phil on Tuesday’s This Morning she was stunned by the backlash she’s received, including vile trolling messages and death threats.

“If I could go back in time, I would change the whole thing because it was never meant to be like that. I don’t like to see anybody in that much distress, like [Kim] was at the end. It’s been the worst week of my life actually.”

Coleen withdrew from a planned appearance on today’s Loose Women and radio interviews in the wake of her clash with Kim and This Morning tears, with a rep saying she’s still “very upset” and wants to spend time with her family.