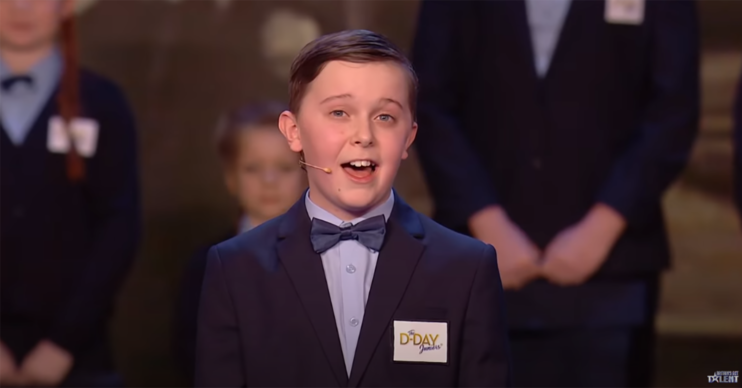 Judges of BGT are impressed this week with a junior choir who sing an original song in memory of war heroes from the past.

They sing Pass It On- which is about passing the message forward and keeping remembrance alive for future generations.

The young vocalists stand in the foreground.

Behind them, black-and-white images of service men and women from the past flash up on the screen.

Meanwhile, they will sing lyrics including: “Sitting in the classroom learning history of the past. On turning the pages, I can’t believe my eyes.

“Now I know how you saved us, want to shine a light.

On the show, they wear their school uniforms and carry book bags.

It will air one day after VE Day 75th anniversary celebrations.

D Day Darlings got to the Britain’s Got Talent final two years ago, but comedian Lost Voice Guy beat them in the end.

However, they were keen to have another chance with the junior choir.

When will live Britain’s Got Talent shows be back?

This week, judge Amanda Holden revealed that the live shows should return to screens later on this year.

Fans previously doubted it would happen so soon due to coronavirus, and the need for social distancing which made hosting anything in front of a live audience tough.

But she said TV bosses told her to keep ‘early autumn’ free in case the live shows can be resumed then.

Are you looking forward to seeing D Day Juniors on the show on Saturday? What has been a highlight of Britain’s Got Talent for you so far this year? Go to our Facebook page @EntertainmentDailyfix and leave a comment to let us know.