The post was an image of a female model in gym gear and they obviously forgot to check the comments section of the post which could also be seen.

This particular comment read: "I love to [bleep] your [bleep], and viewers weren't very impressed that this had gone unnoticed by the BBC.

I’m no prude, but I’m absolutely appalled by their standards.

Top tip for getting into running? Find a crew - a group you feel safe to start in. Its motivating having someone you’re accountable to. You’ll make friends AND company makes the time pounding the pavements fly by! - I had the pleasure of running with @adidaslondon runners club (check them out) they run weekly & it’s for women of all abilities, from all walks of life. - If you’re reading this thinking, “I like the idea but, I can’t run”...YOU CAN!!! Set yourself up for success and remember starting is half the battle. 🏃🏻‍♀️ #AD #fitnessmotivation Fitness doesn’t look like one thing.

One viewer, 55-year-old Ashleigh Moss, revealed to The Sun Online that she was shocked to see the very rude comment on the screen.

Worse still, she was watching the news programme with her six-year-old granddaughter.

"I’m no prude, but I’m absolutely appalled by their standards," she told the tabloid.

Ashleigh did say that it was a shame that such a message should appear during the segment which was on online bullying.

"It was quite an uplifting piece, it was quite positive," she said. "Then they showed a plus-sized model’s Instagram. When I saw that comment I could not believe it - I was gobsmacked."

The piece came after Little Mix star Jesy Nelson admitted to feeling suicidal after being targeted by trolls.

The BBC has since addressed the issue with one spokeswoman saying: "The mistake was spotted immediately and the image was taken down."

However, despite the BBC's swift action, viewers weren't impressed that the message was even shown in the first place, with one viewer adding: "Since when has it been acceptable to show such disgusting language in the news?" 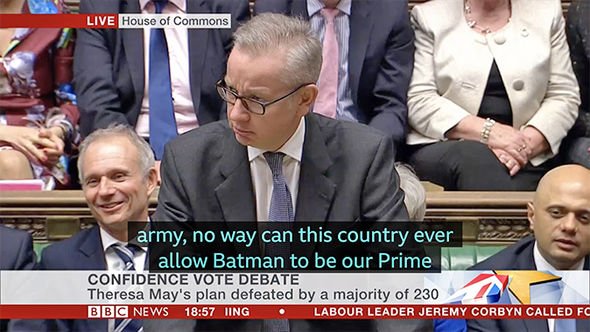 This isn't the first time that the BBC has come under fire for something of this nature.

Back in January, they made a rather embarrassing mistake with the subtitles during Michael Gove's speech in the House of Commons.

During coverage of the Confidence Vote debate in Parliament, Gove hit out at Jeremy Corbyn after Theresa May's Brexit plan was defeated by a majority of 230.

But the subtitles seemed to have a mind of their own, leading to some red faces at the news channel.

He continued to trash talk the Labour leader, as he said: "No way can this country ever allow that man to be our Prime Minister."

However, the subtitles read: "No way can this country ever allow Batman to be our Prime Minister."

Yet, upon reflection, Batman might just be the leader we need right now.