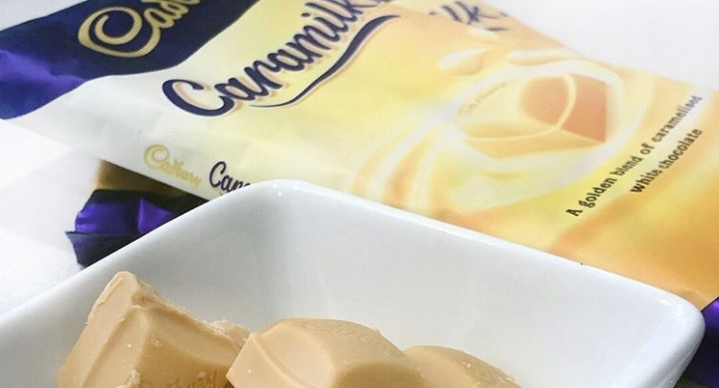 Cadbury selling Caramilk – made from caramelised white chocolate – for £6.99 a bar!

Single squares of the bar sold for up to $10 a time in Australia!

A limited chocolate bar that had those with a sweet tooth begging for more when it was released down under is set to be available in the UK.

Cadbury’s Caramilk was an online best seller after it was relaunched for the Australian market 18 months ago.

It had previously been a favourite treat for Aussies and Kiwis in the early 1990s until the line was discontinued in 1994.

However, the caramelised white chocolate bar made a comeback to shops in early 2018 – and has been in high demand ever since.

The wait is over…Caramilk is here! 🎉

And now chocoholics from the other side of the world will be able to enjoy Cadbury’s best kept secret after an online retailer has made it available to purchase over here.

Caramelised white chocolate goodness comes at a price, though.

A bar cost just under the equivalent of £2 when it was revived in February of last year.

But that price rapidly soared as Caramilk fans snapped up as much of it as they could.

Some reports claim single squares of the bar sold for up to $10 at the height of the sweet’s popularity.

And it seems that being so sought after may also have influenced for how much it is being flogged in this hemisphere – with one gift shop setting a price tag of £6.99 for 180g of Caramilk.

That doesn’t include shipping, either – so would you pay that much for a bar of Cadbury’s?

Put down the chocolate — some of Cadbury’s limited-edition Caramilk are being recalled after small pieces of plastic were found in a “limited number” of blocks.https://t.co/2R4pHF4oAY@abcnews pic.twitter.com/c0aDXRT8cW

In other chocolate news, fans recently pondered whether a limited edition run of orange Twirls have actually gone on sale.