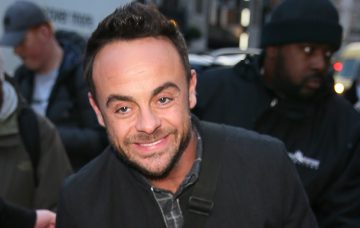 They were spotted in Abu Dhabi

Ant McPartlin has taken his girlfriend Anne-Marie Corbett and her children on holiday to Abu Dhabi.

In photos obtained by The Sun, the couple and Anne-Marie’s two daughters were spotted browsing the Duty Free section at Abu Dhabi airport as they prepared to fly home.

Ant, 43, sported a casual look in a pair of black jeans, a white t-shirt and trainers while he and Anne-Marie looked at the beauty products.

After the shopping was done, the four of them headed to catch their flight.

According to The Sun, Ant, Annie-Marie and the children joined the business class line for their flight.

A source told the publication: “Ant, Anne-Marie and the two children were going in and out of Departures before their flight back to London.

“He was clearly tired, but he still had time to stop and have a big group picture taken with all the Duty Free staff before catching his flight.”

This isn’t the first holiday for Ant and Annie-Marie as they enjoyed a romantic getaway to Florence, Italy, last year.

Ant returned to work last month after taking much of last year off to focus on his recovery following his drink-drive arrest.

In January, Ant and his telly partner Dec Donnelly were left shocked when they won Best Presenter at the National Television Awards despite Ant taking time off.