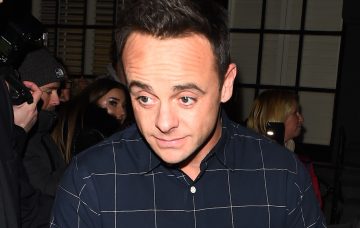 They took the pups for a walk

Ant McPartlin and his girlfriend Anne-Marie Corbett have stepped out with their two new adorable puppies.

The couple have bought two super cute Maltipoo pups – which are a cross between a Maltese terrier and a poodle – and the pooches are apparently named Milo and Bumble.

On Tuesday, Ant and Anne-Marie were spotted taking their two dogs to the vets for their inoculations before embarking on a walk with their pups on Wimbledon Common.

Ant sported a long padded coat and a hat as he carried the dog while walking to their waiting car.

Anne-Marie also wrapped up for the cold weather in a khaki padded coat and a navy blue bobble hat as she cradled the second puppy.

According to The Sun, the pair bought the dogs a few weeks ago and are already in love with their new additions.

A source said: “He has not stop smiling since picking them up. He’s in a really positive place.

“The pups are from the same litter so get on well and are full of beans. He’s started to house-train them and show them to friends.”

Ant also has a chocolate labrador called Hurley, which he shares with ex-wife Lisa Armstrong.

The insider added that Ant is “in no way replacing Hurley” but he “just really misses him when he’s not around”.

Speaking to the publication last month, Ant said he and Lisa still share Hurley “quite evenly” as they finalise their divorce.

He said: “We still share quite evenly. Hurley’s welfare comes first and we both love him very much. That’s the way it is really.”

The former couple were granted a divorce in October but are still in negotiations in how to divide their assets, with Hurley also regarded as a personal possession in the eyes of the law.

Ant has recently returned to work with telly partner Dec Donnelly after taking much of last year off to focus on his recovery following his drink-drive arrest.

Last month, the duo were left shocked when they won Best Presenter at the National Television Awards despite Ant taking time off.

What do you think of Ant’s new puppies? Leave us a comment on our Facebook page @EntertainmentDailyFix and let us know what you think.