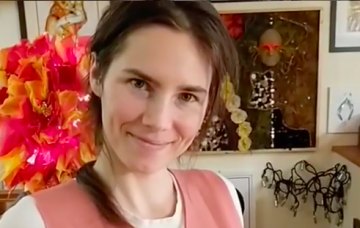 In a bizarre move, acquitted murderer Amanda Knox – who spent four years in prison for the killing of her British flatmate Meredith Kercher – has shared a series of pictures from a murder mystery party.

As if that wasn’t shocking enough, the now-author and podcast host joked about how she’d come dressed as a woman accused of stabbing and poisoning someone.

In a comment next to the sepia-toned photograph of her in costume, alongside her fiancé Christopher Robinson, Amanda wrote: “Victorian London: A priceless painting goes missing and the owner is found both poisoned and stabbed.”

The 31-year-old then joked about her own sentence, adding: “And would you believe it, I, the Countess of Lovelace, am accused. Also acquitted, all in 4 hours. Better than 4 years. #murdermysteryparty.”

Amanda – who now hosts a true-crime podcast called The Truth About True Crime – was referencing the terrible 2007 death, when Meredith was stabbed 47 times, while she was studying in Perugia, Italy.

She was initially charged with the murder along with her then-beau Raffaele Sollecito. They were sentenced to 26 years in prison, but an Italian appellate court later found her not guilty.

In a further twist in 2013, Italy’s highest court sent the case for retrial and found the pair guilty AGAIN, before they were finally exonerated of the charges in 2015, after a final appeal.

Rudy Guede was convicted of the murder back in 2008 and is serving a 16-year prison sentence.

Comments were divided over the images, with many calling Amanda an “idiot” and the pictures “sick” and “classless”. Another wrote: “A family lost their daughter in this tragedy and regardless whether or not she is guilty of this crime, the one crime she is guilty of the endless pain she brings Kutchers.

“The depths of her selfishness, self importance, extremely inappropriate behaviour and utter lack of compassion and intelligence is beyond comprehension.”

Others insisted Amanda deserved to joke after everything she’d been through, writing: “THE SHADE!!!! Enjoy your deserved freedom, lovely.” Another said: “I am living for this caption 😂.” While one more said simply: “Amazing!! 😍.”

The tragic murder was last in the spotlight back in 2016, when Netflix released a shocking documentary about it.

At the time, Amanda admitted many still think she’s guilty, saying in an interview: “I think I’m trying to explain what it feels like to be wrongfully convicted. To either be this terrible monster or to be this regular person who is vulnerable.

“And what I’m trying to convey is that a regular person like me – a kid who was studying abroad, who loves languages – could be caught up in this nightmare where they’re portrayed as something that they’re not.”