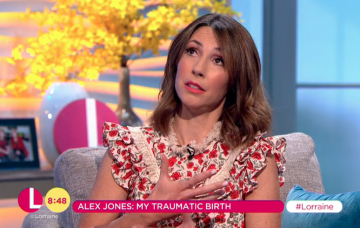 Presenter Alex Jones revealed her husband feared he would have to raise their child as single dad following complications with the birth of their son Teddy.

Appearing on Lorraine earlier today, the 41-year-old told host Christine Lampard how Charlie was left holding the baby as she was rushed into emergency surgery after 12 hours of labour during which she lost “a lot” of blood.

Alex said: “I think people can forget how traumatic it can be for dads.

“Charlie was an immense birthing partner. Of course, before you go into it you don’t know what to expect. And he came through more than I can tell you.”

Joking her husband became a “kind of hypno-birthing expert”, Alex added his support meant they “just got through [the labour] together”.

She continued: “And of course when Teddy was in my arms my maternal instinct kicked in and that was all that worried me… that he was out in the world, safe.”

Alex, however, was not in the clear.

“As far as I was concerned that was the job done,” Alex added.

“But Charlie, from his perspective, could see what was happening… and I lost a lot of blood. We were in the birth centre and everything was nice and quiet and then suddenly we were up in the emergency room.

“There were a team of doctors and he was left holding this new little baby thinking: ‘Oh my goodness, is she going to make it? Am I going to be a single dad?'”

The star also revealed her worrying condition had an effect on the development of Charlie’s relationship with his newborn son.

Alex said: “That twelve hours, really, of labour – it was such a rollercoaster for him. The end bit being really, really difficult. And for the first eight weeks, it took him a while to adjust.

“Charlie was meant to be a dad, it really is his calling in life – he loves it, he’s fantastic. But it is very different. The men can only be supportive bystanders. All the focus is on the women and I think we forget sometimes how difficult it is.”

She added: “We have all the hormones that allows us to develop this bond. The dad, it has to come more naturally.”

Alex – who said mothers are put under too much pressure to breastfeed – also admitted she returned from maternity leave too soon after having Teddy, revealing she was scared a replacement might be “better” in her role.

Reflecting on her return to full time work, Alex said: “I went back a bit too soon. Before you have a baby you don’t really understand how it’s going to change you.

“I made promises that were sort of unrealistic.”

Alex added she took only three and a half months of time off after Teddy arrived in January of 2017.

“In hindsight, five and a half months would have been better,” she said.

“But you don’t know before going off on maternity.”

But despite her regret, Alex also insisted new mums should feel assured in being able to say they want to go back to work.

She said: “I think women find it hard to be able to admit that they want to go back to work and that they are going to go back a bit earlier than everyone thinks is acceptable.

@lorraine Well said Alex Jones! There is a hell of a lot of pressure to breastfeed 🤱. Women do what they believe is right for their babies 👶

“It’s okay to say I like my job and I want to continue doing it while I’m a mother. You’ve worked very hard to get to where you are.

“Anyone who respects their job, they are scared about someone stepping in and doing it better. It is a worry.”

She continued: “People expect you to say the baby is the most important, and of course it is, but side-by-side you still want to be the same person you were before.

“You’ll never be exactly the same of course. I think it’s okay to say: ‘Yes I’m going to go back to work.'”