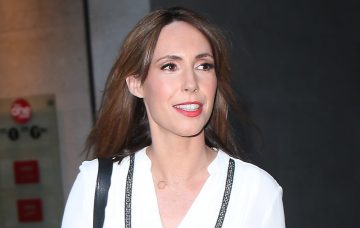 She's given a candid interview about being a first-time mum

The One Show star Alex Jones has described the agonising pain she felt while trying to breastfeed her son Teddy.

In an interview with Mail On Sunday, the TV presenter, who gave birth to son Ted in January 2017, described the pain she suffered while trying to breastfeed, saying she nursed her newborn son while crying.

She said: “I tried really hard to breastfeed, but I had no idea it would be so excruciatingly painful. Often I’d be feeding with tears cascading down my cheeks.

“Charlie is a fantastic support and now I think our relationship is a lot stronger because of Ted, but we struggled to find a way to even like each other sometimes in those early days.

“Once I sat upstairs in our bedroom for about four hours trying to feed Ted, feeling so upset and isolated.

“Or there would be nights when I was waking to feed Ted every two hours; Charlie would be snoring beside me while I felt murderous.

“It’s not your partner’s fault he can’t breastfeed, but it’s tough.”

Alex, who said breastfeeding improved from the six-week mark onwards, also revealed she feared she would lose her “place on the sofa” at The One Show while she was on maternity leave.

The TV presenter admitted she was worried she would be replaced if she did not get back to work quickly.

“I was worried I’d lose my place on the sofa, because in television you can’t take anything for granted,” she said.

“I’d like to stay on The One Show as long as possible, but this is a fickle industry and in two years’ time I might be at home with Ted every day, so I have to make the most of it.”

TV presenters Angela Scanlon and Michelle Ackerley temporarily replaced Alex while she was on leave.

However, Alex, 40, said the first months back at work, just three-and-a-half months after giving birth, were “horrific”, adding: “I was completely deluded to go back so early.

“My bosses are incredibly supportive of parents and asked me if I was sure I wanted such a short maternity leave; that pressure came entirely from me.”

Alex, who has written a parenting book called Winging It, is about to start a gruelling challenge for Sport Relief.

She will battle freezing temperatures and agonising blisters as she travels across the UK for a relentless schedule of swimming, hiking, cycling, caving and running.

The presenter is teaming up with four other mums from around the country for The Mother Of All Challenges to help raise awareness of maternal health and raise cash for Sport Relief 2018.

Alex said: “I have taken on challenges before, but this is a whole week’s worth of tests. Tackling them as part of a team of mums makes this the most special thing I have done for Sport Relief.

“It will push us out of our comfort zones and really test us physically, mentally and emotionally.

“I can’t wait to get started with these fantastic women.”

The challenges start on Mother’s Day (March 11) at Loch Ness, with the group doing a relay swim in the lake, where the average temperature is 5C (41F) at this time of year.

Next they will lace up their hiking boots to conquer Helvellyn via Swirral Edge in the Lake District. The tricky mix of climbing and walking includes a daunting ascent of 2,854ft (870m) and a descent of 2,625ft (800m).

The following day the mothers will cycle up three of the Lake District’s toughest passes, before they travel to Alex’s home country of Wales to navigate a maze of dark caverns to make it out of Porth Yr Ogof cave in the Brecon Beacons.

The final challenge, on March 16, will see the group tackle a relay coastal run across the hilly Welsh coast, taking in clifftop views, secluded coves and wild landscapes.

Viewers can follow the group’s progress on The One Show each night on BBC One during the week of the challenge.

Alex previously said of her teammates: “Thanks to these super women for taking part. It’s gonna be tough, but every penny raised will make it 100% worth it. It’s great that we’re doing it as a team and I’m very grateful to them for volunteering to get involved.

“Cycling, swimming, hiking, caving and running a marathon in freezing temperatures is no easy feat as well as giving up their precious time to train and agree to be away from their loved ones for the duration of the challenge itself.”