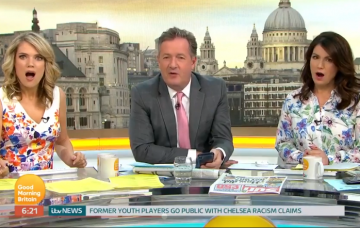 He said he had received a "shamefaced" email from her

Piers Morgan jokingly accused Lorraine Kelly of “thieving” his Good Morning Britain scripts in a bid to “sabotage” him during Wednesday’s show.

The presenter told viewers he had received a “shamefaced” email from Lorraine explaining that his scripts were delivered to her by mistake.

Piers, 53, began his rant by slamming the “backstabbers” at ITV before claiming the show was in “complete chaos” due to blunders with the scripts, earpieces and autocue.

“The autocue hasn’t been working, the director couldn’t hear us and I didn’t get any scripts,” Piers told viewers. “I didn’t get anything, I didn’t know what the hell was going on.

“I didn’t have a run down, it was like complete chaos in here.”

“I’ve now had a shamefaced email from Lorraine Kelly,” he added.

Lorraine’s email read: “Morning, just going through the papers and your script pack was stuck between The Sun and The Telegraph and delivered to me by mistake.

“Hope you got sent a replacement.”

Piers jokingly vented: “The sabotage in this place. You know what I was saying about the backstabbers at ITV. The sabotage knows no bounds to these people.

What are they worth to ya @piersmorgan? PS. Tune in to Lorraine from 8.30am – we’ve got a cracking show! 😉 pic.twitter.com/3bebdRQgmf

“Lorraine Kelly thieving my scripts to make me look amateurish, off my game, but it won’t work.”

Susanna Reid cheekily added: “She doesn’t need to do that, does she?”

On the show last week, Piers pulled Lorraine up on comments she apparently made about him last month.

When GMB linked to the Lorraine studio, Piers revealed that his wife, Celia, told him she had heard Lorraine off-camera accusing Piers of “having so much work done” on his face, despite telling him on air he looked great.

Piers had appeared on Lorraine’s show last month to talk about his beauty secrets, with wife Celia phoning in on air to embarrass him!

But apparently while on the phone, Celia overheard something interesting!

It came to light after Lorraine told Piers and Susanna her show on May 2 would cover how eyebrow tattoos can be the secret to an age-defying look.

“I’m having one with Lorraine,” Piers said, referring to the procedure.

“Have you not already had your eyebrows done?” Lorraine asked. “You’ve had everything done!”

Piers hit back: “When I appeared on Lorraine’s show to discuss my beauty secrets, on air Lorraine was like, ‘oh, you look fabulous and beautiful.’

“But what I was later told by my wife – who could hear Lorraine talking to Dan Wootton just before I went on air – was ‘oh he’s had so much work done’ and Wootton went ‘oh I know he has!'”

As Piers continued his rant, Lorraine was left slightly flustered and burst into laughter.

“The pair of them apparently… Then suddenly on air, ‘oh tell me the secrets of your natural beauty’. So you were caught, Kelly!” he added.