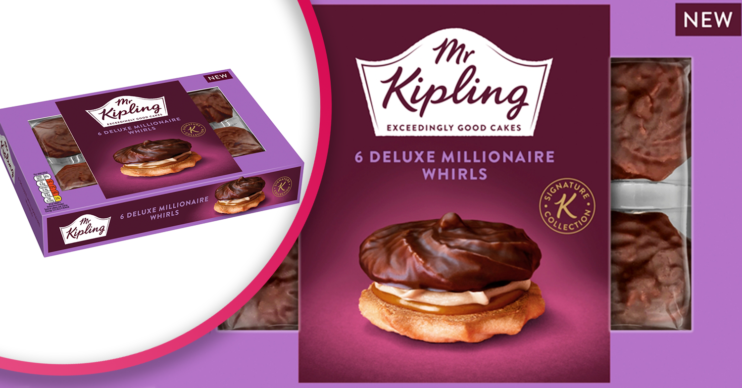 They're filled with toffee sauce and salted caramel buttercream

Mr Kipling really is spoiling us with his latest launch – an upgraded version of the delicious Viennese Whirl.

The new addition to the brand’s Signature Collection of biscuits and cakes sounds pretty special.

It not only features the deliciously moreish shortcake biscuit, but it’s smothered in chocolate!

That’s not all, though, because there’s also good news for caramel fans.

NewFoodsUK shared a picture of the find on their Instagram page and it was flooded with comments.

“I’d easily scoff a box of those in one sitting,” said another.

However, before you’re too glutinous, bear in mind the effect each 31g Mr Kipling Millionaire Whirl will have on your waistline.

They contain a whopping 167 calories each!

However, we doubt that’ll deter those looking for a chocolatey, caramel biscuit fix.

We must admit, here at ED!, we’ll be disregarding the calories too!

“We have to try them,” said another tagging their pal.

“OMG these look amazing!” declared another.

“I’ve been saying they should do this for years!” said another.

“Oh my days,” said another, tagging their pal. “It must be found and bought.”

Others were planning on getting the sweet treats in to scoff during an episode of the Great British Bake Off.

It airs on Channel 4 next Tuesday (September 22).

“We need to get these one week for Bake Off,” they said.

“This is ridiculous, how can you not buy these,” said another with the love heart eyes emoji.

Others only had one thing on their minds – how they could get their hands on them!

“We need to have a race, see who can find them first!” said one, tagging their pal.

NewFoodsUK luckily spilled the beans on where they spotted the new Mr Kipling treats.