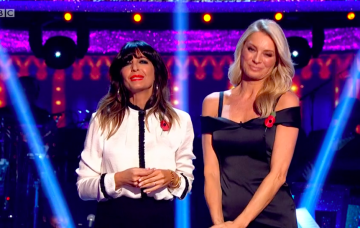 The presenters had everyone talking...

The banter on Strictly Come Dancing has never been to everyone’s taste, but Saturday’s episode had what-seemed-like the whole internet cringing.

Presenters Claudia Winkleman and Tess Daly were the particular focus of Twitter’s disdain, with viewers labelling them everything from “cringe” to “awful” – and some even calling for them to be sacked!

Tess, 49, and Claudia, 46, performed their usual banter between dances, but the millions of fans watching from their sofas seemed unimpressed.

One viewer tweeted: “The only bad thing on #Strictly is the ‘joke’ script Tess and Claudia are reading from. Honestly it’s getting worse week by week”.

Oh this Claudia and Tess humour though… #StrictlyComeDancing #Strictly pic.twitter.com/BYPgnOYmCp

Another added: “One more couple will be eliminated from Strictly Come Dancing.” Can it be you, Claudia, Tess? #SCD #Strictly”.

A third wrote: “Oh my goodness, Tess and even Claudia are particularly awful tonight #strictly”, while a fourth complained: “Claudia and Tess are not comedians and they never will be #Strictly”.

One blamed Tess, writing: “Dear #Strictly, can we PLEASE dispense with the cringe inducing scripted ‘banter’ between Tess & Claudia. Just admit it – Tess can NOT pull it off. #AnnualRequest”, while another blamed her co-presenter, tweeting: “#Strictly please BBC can you pair Tess with Zoe Ball and dispense with Claudia?”

Do the audience get paid to laugh at tess and Claudia’s cringey jokes?? #strictly

The banter between Tess and Claudia #SCD #Strictly pic.twitter.com/zpymZqzkoZ

A few fans, though, attempted to be more positive, writing: “Both Tess and Claudia looked gorgeous tonight! #Strictly”.

Another added: “@TessDaly Hi Tess – I’d just like to thank you for your constant professional approach to anchoring Strictly from its very conception and the way you handle the often caustic appraisals from some judges. You and Claudia make the show what it is today. Thanks.”

Despite the divisive banter, the talent show enjoyed some more amazing ratings, according to the BBC.

Strictly had a peak of 10.3 million viewers, with an average of 9.5 million – making it the most-watched programme across all channels yesterday.

It was an intense episode, following a week of injuries and difficult headlines.

We'll see Boyzone back in the ballroom on the 16th November for a #Strictly special for @BBCCIN! #ChildrenInNeed2018 pic.twitter.com/W8hI0zoJTK

The Strictly Twitter account wrote: “We’ll see Boyzone back in the ballroom on the 16th November for a #Strictly special for @BBCCIN! #ChildrenInNeed2018”.

Poor old Tess and Claudia. OK, so not everything lands, but we quite enjoy a bit of cheesy chat…

What do you think of the presenters’ chat? Leave us a comment on our Facebook page @EntertainmentDailyFix and let us know what you think.