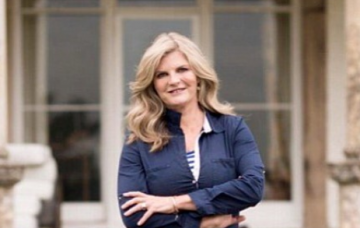 Strictly’s Susannah Constantine ‘has no rhythm’ and is ‘unteachable’!

But she's got an interesting technique for learning her steps...

She might know everything about clobber and style after years of dressing the nation as one half of fashion’s dynamic duo Trinny and Susannah, but it would seem that Susannah Constantine is not quite as confident when it comes to her dancing prowess!

Writing for the Mail on Sunday, Susannah did little to instil confidence in her readers about her forthcoming Strictly stint.

“The bookies are tipping me to be the first to leave,” she admitted.

This might leave Strictly fans wondering why she decided to go on a dancing show in the first place – a question the fashion queen actually asked herself!

“What. On. Earth. Possessed me to sign up?” she mused. “Most people have at least a smidge of rhythm, but as deep as I have dug to find mine, that well is completely dry.”

She seemed just as anxious about it all over on her Instagram earlier in the week, too, announcing: ‘#Strictly here I come!!! HELP! @bbcstrictly’

With the first rehearsals already underway, Susannah told the Mail that her debut practise last Tuesday ‘transported me back 40 year’ and left her feeling like a  ‘gauche, clumsy teenager’.

Revealing that the celebs’ first task was to learn three waltz steps and three cha-cha steps for the group dance routine to open the show, the TV star admitted that she ‘planted herself at the back and couldn’t even see the choreographer.

So how did she take note of the required moves?

(Well she does already know all the Steps…)

Susannah did however reveal one area where she is confident in her abilities – her overall level of fitness.

“I had thought of doing some sneaky preparations,” she admitted. “Some yoga or special strength training before starting the show, but I’ve always been quite strong and had stamina and since losing weight a year or so ago, I’m pretty fit.”

Well that’s one positive then…

And despite all the self-deprecating comments, Susannah does seem genuinely thrilled and excited to be part of the Strictly 2018 line up.

“I know there’s very little chance I’ll be lifting the glitterball trophy, but I hope I won’t disgrace myself,” she said.

We’re sure you won’t, Susannah – and we can’t wait to see who you’re partnered up with!