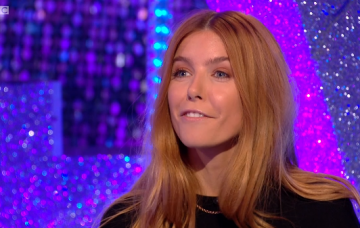 She's having none of it!

Talk of the Strictly Come Dancing ‘curse’ is never far from any celeb that signs up, but Stacey Dooley has slammed the recent rumour that her boyfriend Sam Tucknott isn’t happy about her being on the show.

When it was reported that her beau-of-three-years was feeling “insanely jealous” about her closeness to pro dance partner Kevin Clifton, Stacey appeared to waste no time in shutting down the gossip.

On Wednesday, the documentary-maker shared a black and white Instagram snap of her and Sam snuggled up on a flight – and she very bluntly captioned it with the fist emoji!

Her bold statement comes after a source told The Sun that the show was coming between them and personal trainer Sam wasn’t happy about her friendship with Kevin.

The insider claimed: “Sam has also been quite vocal about her dancing with a single man and was really paranoid that they were going to split because of the show.

“She says he has become insanely jealous even though she insisted there was nothing for him to worry about.

“Kevin and Stacey are very close, as is inevitable through the course of a show like Strictly, but they’re just trying to focus on winning the series.”

The gossiper also claimed that Sam was once almost turned away from sitting in the Strictly audience to watch Stacey, because he was wearing a tracksuit!

The star shares her London flat with Sam and their beloved bulldog Bernie.

Stacey, 31, and Kevin, 36, have made it to this weekend’s semi-finals of Strictly Come Dancing, after receiving high scores throughout the series.

We’re sure Sam will be there cheering Stacey on, too!

What do you think of the rumours? Leave us a comment on our Facebook page @EntertainmentDailyFix and let us know what you think!