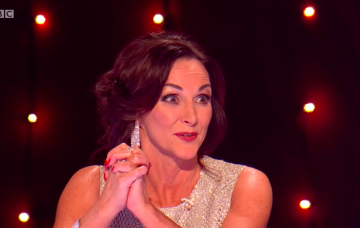 The Strictly Come Dancing judges are known for causing controversy with their feedback, but viewers were shocked for all the wrong reasons by Shirley Ballas’ comments on Saturday night.

Fans of the dancing show couldn’t stop laughing when the head judge told newsreader Kate Silverton to “open those legs”.

Presenter Tess Daly then asked the former dance champion for her opinion.

Shirley called the news anchor “Kate the consistent,” adding: “You bring the most impeccable timing to the ballroom.”

Then she amusingly told the mother-of-two: “Now I want you to take one small chance with a little more striding out – just a little bit. Take a chance, open those legs, move a little bit more. Get some striding in.”

Viewers watching at home were divided over the innuendo, with many shocked and others finding it hilarious.

One wrote: “So Kate has to open her legs Shirley?! 😂😂 #Strictly.” Another added: “Great quote from Shirley ‘be adventurous- open your legs more’ 😂 #strictly #StrictlyComeDancing.”

A third seemed shocked, tweeting: “Shirley ‘You need to open those legs’. Not advice one would normally recommend… #strictly.”

Others joked: “Did Shirley just say ‘take a chance and open your legs’?! #Strictly,” and another commented: “Shirley realising too late that she just told Kate to open her legs 😂 #strictly.”

It follows a week of controversy for Shirley, 58, after viewers attacked her for “targeting” Faye Tozer with her comments.

She hit back at trolls on Twitter, posting a quote that declared: “No matter what you do, someone will have something negative to say. Try not to take it personally.”

Shirley added the comment: “I love this I was sent today. After all the negative people and such nasty disgusting comments I received, I post this for anyone out there who has to deal with nasty people.

I love this I was sent today. After all the negative people and such nasty disgusting comments I received ,I post this for anyone out there who has to deal with nasty people. Be kind caring and loving. I live by that. HATE is an awful trait. pic.twitter.com/gAWdWnGoqs

“Be kind caring and loving. I live by that. HATE is an awful trait.”

She also spent time on Twitter replying to many of the trolls directly.

“Thank you for your lovely comments,” she tweeted sarcastically to one that read: “Faye has a lot of class, which Shirley hasn’t.”

The TV star also thanked others for defending her, writing to one: “I’m happy for people to disagree in a non aggressive hateful way. We must make the world go round with love and kindness. Enjoy tonight.”

We love how cheeky the Strictly viewers are. There’s something about Blackpool that brings it out in all of us…

Have you been enjoying Shirley as head judge this year? Leave us a comment on our Facebook page @EntertainmentDailyFix and let us know what you think.