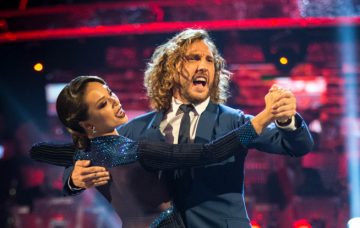 A statement was read out on Loose Women

Strictly Come Dancing has confirmed Seann Walsh and Katya Jones will continue to dance together in the wake of their kissing scandal.

Seann, who is in a relationship, and Katya, who is married, were seen snogging in the street in pictures obtained by The Sun on Sunday at the weekend.

They have both since apologised for what they called a “drunken” mistake.

There had been calls for the pair to quit the show but a spokesperson for Strictly Come Dancing has now issued a statement saying the couple will dance together as planned on Saturday night.

Ruth Langsford read a statement from Strictly on ITV’s Loose Women on Monday, telling viewers: “Interesting. This has just come through. Strictly has confirmed Seann and Katya will be dancing together this weekend as planned. No one is pulling out of the show.”

The Loose Women opened the show with a discussion of the incident.

Ruth, who competed on Strictly last year, said: “Having been in Strictly, I saw that and thought how awkward for everybody and how humiliating for their partners.”

Linda Robson said she felt Seann and Katya should continue in the competition but acknowledged it would be “awkward” for their partners and was a “horrible” thing to see.

Jane Moore added: “It’s a very difficult situation because anybody in that situation would say, ‘Okay, if I give you another chance it’s on the basis you never see that person again’ but they have to go back into rehearsals.”

Stacey Solomon said she’d find it hard watching her partner dancing every Saturday with someone they had kissed behind her back if she was in their shoes.

Both Stacey and Ruth said it was easy to look in from the outside and say you’d forgive the person or not mind them still being in the competition, but it’s very different when you’re the person at the centre of the story.

A source had told The Sun on Sunday of Seann, 32, and 29-year-old Katya: “They were snogging like a pair of teenagers and didn’t seem to care who might see them.”

On Sunday evening, both Seann and Katya issued apologies via their Twitter accounts.

Seann wrote: “In light of the story in today’s newspaper I would like to offer my sincere apologies for my actions. This is no excuse but it was a one-off drunken mistake which I am truly sorry for.”

In light of the story in today's newspaper I would like to offer my sincere apologies for my actions. This is no excuse but it was a one-off drunken mistake which I am truly sorry for.

Katya, who is married to fellow Strictly professional dancer Neil Jones, echoed that by writing: “I’m so sorry about any offence or hurt I may have caused with my actions. I wasn’t thinking and it was a one-off mistake after some drinks. I love my husband and we are very happy together, this is not a reflection on our relationship.”

The images were published the day after Seann and Katya took to the Strictly dance floor for Movie Week, giving a Matrix-themed performance.

The Strictly results show is pre-recorded on a Saturday night and aired on the Sunday, so although the pictures were published in the newspaper on Sunday morning, the episode that broadcast afterwards was recorded before the scandal.

After the incriminating pictures surfaced online, Katya’s husband Neil took to Instagram to post a supportive video of his wife with the Mock the Week star.

He has not directly referenced the kiss.

Meanwhile, Seann’s girlfriend Rebecca Humphries has liked a string of tweets condemning Seann’s behaviour, including some tweets asking why Seann didn’t apologise personally to Rebecca in his tweet.

One tweet liked by Rebecca read: “Erm so where’s the apology to @Beckshumps? Oh and mate, you’ve massively messed up here. Monumentally. She’s a 10. You’re now in the bin.”

Do you agree Seann and Katya should remain in the competition? Leave us a comment on our Facebook page @EntertainmentDailyFix and let us know what you think.