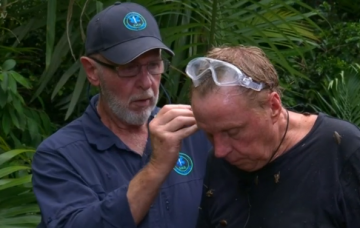 At last, we've missed him!

It’s been a series of change on this year’s I’m A Celebrity…Get Me Out Of Here!

But fear not, right at the last minute we got to see him – Medic Bob arrived to save the day!

Read more: Harry Redknapp set to be the biggest I’m A Celeb winner ever

Bob’s appearance occurred when Harry Redknapp was undertaking his final trial on the show.

He was buried in a chamber filled with rats and cockroaches – and one of the roaches went in his ear.

As he got out, Medic Bob was called in to get the critter out, and fans went wild at seeing him for the first time this series.

Not #imaceleb without Bob!

Someone said they were disappointed that they hadn’t seen Dr Bob .. someone must’ve seen your tweet #ImACeleb pic.twitter.com/r795PcNuSV

Poor Medic Bob. This is the first time he's appeared in this series and likely the last.

Read more: Fans give their verdict on Holly Willoughby

Usually we see Bob almost every night as he steps in to talk the celebs through the safety aspect of the trials.

He had been seen on sister show Extra Camp, but it was looking increasingly like he wouldn’t make an appearance on the main show.

Fortunately, we got to see him before the series was out.

Before his trial, fellow finalists Emily Atack and John Barrowman had completed their own challenges.

Emily had worn a helmet filled with critters to win her stars, and John ate various jungle delicacies.

All three of them brought home a full composite of stars.

Were you pleased to see Medic Bob? Leave us a comment on our Facebook page @EntertainmentDailyFix and let us know what you think.