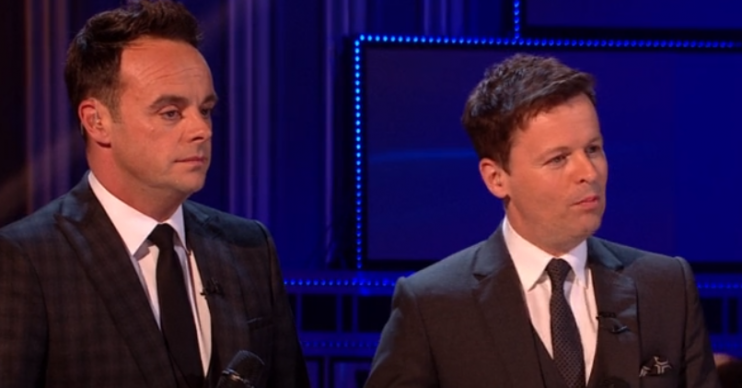 He wasn't far off the mark

Ant McPartlin mocked his Britain’s Got Talent co-host Dec Donnelly during last night’s (May 29) live semi-final after the presenter stumbled into a geographical blunder.

As the show kicked off and Dec introduced the first act, illusionists Angels Inc, he misspoke as he told the audience where they were from.

Dec said Angels Inc are from Holland, but Any quickly stepped in to correct him.

He pointed out: “No, actually, they’re not from Holland. They’re from The Netherlands.”

Dec stared at the camera and offered nothing in the way of a reply, as Ant quipped: “You made a bit of a mug of yourself there, didn’t you?”

Dec’s blunder was brought up again later in the show.

When they revealed the acts that would be performing again in the finale on Sunday, singer Colin Thackery and comedian Kojo Anim, David Walliams decided to tease Dec about his earlier gaffe.

He joked: “I wanted the girls from Holland to get through…”

Holland is often used interchangeably with The Netherlands, although it’s incorrect as the word refers to a region nestled along the country’s western coast.

Despite it being a blunder, what Dec said isn’t far off the mark. On Angel Inc’s website, it states that four of the group’s five stars now live in the Holland region.

Lieke and Lianne both live in Amsterdam, which is in North Holland, while Shannon lives in Blaricum and Angeli in Pijnacker – part of North and South Holland respectively. Only Carey, a resident of Tilburg in the North Brabant province, lives outside the region.

There have been three semi-finals to date and the acts to have made it through are: magic dog duo Dave & Finn, kids’ choir Flakefleet Primary School, magicians 4MG, singer Siobhan Phillips, singer Colin Thackery and comedian Kojo Anim.

Colin Thackery, who reduced viewers to tears last night, is the current favourite to win with odds of 13/8, according to betting site Oddschecker.