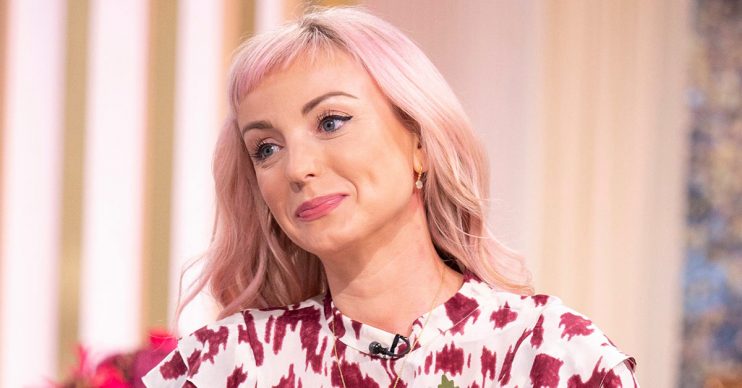 She also let slip a disgusting fact about her co-star!

Helen George has let slip some behind the scenes secrets about the upcoming Call The Midwife Christmas special.

And the actress, 35, also revealed a disgusting fact about one of her co-stars!

Appearing on This Morning on Wednesday (November 6), Helen admitted Miriam Margolyes – who plays Mother Mildred in the BBC drama – chooses to eat something rather astounding for her breakfast every day.

Speaking to hosts Phillip Schofield and Holly Willoughby, Helen said: “Miriam is a scream. She’s so much fun, she’s got the most disgusting potty mouth I’ve ever heard.

“And she eats a raw onion every morning for breakfast.”

An aghast Holly responded: “No she doesn’t! Does she? How did we not know this?”

And Phillip, equally as surprised, asked: “Does she really?”

“Ask her about it next time, honestly,” Helen said. “She says it’s good for her heart and for her health.”

Holly couldn’t help asking: “And how is that to work with someone who’s just had a raw onion for breakfast?”

To which Helen joked: “Well I don’t get that close to her after breakfast, I keep my distance.”

There’s a community in need so we go up and help in our own way.

Helen also revealed some insider information about the Christmas special of the popular drama series, which takes place in the Outer Hebrides this festive season.

She said: “It was beautiful because we got to film there for four weeks and it’s such a stunning place. It becomes a character in itself, it’s so cinematic, and it was really cold. Because the surroundings are just so beautiful that you don’t want to ignore it!”

She added: “We go up there because there’s a small community without any medical health care advisors, nurses or doctors, and there’s a community in need so we go up and help in our own way.

“There’s some babies!” she joked. “And I have some scenes with a cow!”

When asked about whether the show would keep on running until it came up to speed with current day, Helen said there’s a “ceiling point” when it would catch up.

She added: “There is a ceiling point to it, but you never know there might be a spin-off! I’m joking, don’t quote that!”

Explaining why she thought the show – currently about to embark on its ninth series – was so popular, she continued: “The writing is still really good and there’s loads of subjects… I think it holds a mirror up to society.

“Then there’s the nostalgia element. There’s all these hard-hitting issues but they’re wrapped up in the lovely, warm, cosy Sunday night drama that I think people quite enjoy.”

Helen, who has appeared in Call The Midwife since it started in 2012, stunned viewers with her new pink hair, in contrast to her character’s peroxide blonde updo.

Will you be tuning in to the Call The Midwife Christmas special? Let us know on our Facebook page @EntertaimentDailyFix.