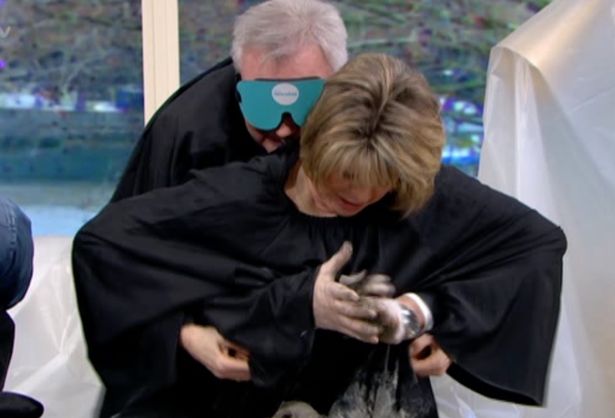 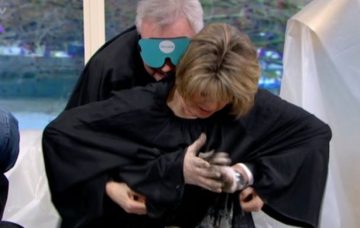 This Morning viewers didn’t know where to look today, when Eamonn Holmes and his wife Ruth Langsford recreated the famous scene from Ghost. Only this was the X-rated version.

On Thursday (21 February), the married hosts were challenged to a pottery-off by Kem Cetinay and Chris Hughes – which resulted in some seriously cringeworthy TV according to fans.

Read more: Nigel Havers reveals he was ‘snubbed’ by This Morning after divisive presenting slot

In fact, many of those watching from home were left wishing they were wearing a blindfold, too!

As Ruth sat at the pottery wheel, Eamonn positioned himself behind her with his arms reaching around his wife to mould the clay.

It was always going to go wrong, wasn’t it?

Within seconds of starting the challenge, Eamonn “copped a feel” of Ruth instead of the clay.

And viewers were quick to call him out on it!

One said: “Eamonn’s just trying to cop a feel #ThisMorning.”

Eamonn doing he does best around women, creeping #ThisMorning *shudders*

Well, we’re pretty sure if they ever make a sequel of the famous 1990 film, Ruth and Eamonn won’t be called.

Stick to the day job, guys!

This Morning had cause to be angry once again this week, when Judith Kilshaw appeared on the show talking about the twins she had bought online in 2001.

At the time, she was labelled “Britain’s most hated woman” as she and her ex-husband Alan hit headlines after admitting they paid more than £8,000 to buy two baby girls online from America.

She now wishes to be reunited with them.

Are Eamonn and Ruth your favourite This Morning presenters? Leave us a comment on our Facebook page @EntertainmentDailyFix and let us know what you think!