Soap expert on This Morning, Sharon Marshall, has revealed she is engaged.

She announced the news on her Twitter feed just minutes before the daytime show started and in the opening round up, flashed her sparkler to hosts Holly Willoughby and Phillip Schofield.

Posting a gorgeous picture of her with her fiancé Paul Fletcher, their daughter, 14-month-old Betsey, and their dog, Sharon said Paul popped the question over the weekend.

So this weekend my Paul asked me to marry him. So happy to say yes. ❤️❤️ pic.twitter.com/dgeZh4RCVW

When the show started, Holly and Phil cut to Sharon in the opening round up.

While announcing Sharon would be revealing all the latest soap gossip on today's show, Phil also said: "Congratulations, by the way."

That is lovely news to start the morning with, well done you.

Holly said: "That is lovely news to start the morning with, well done you."

Sharon shared a close-up of her engagement ring on the programme and had a huge smile on her face. 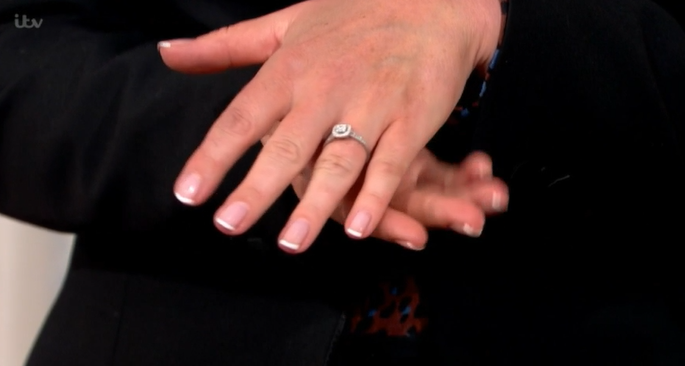 Earlier this year, Sharon admitted she feared her baby was going to die when she woke up in blood six months into her pregnancy.

The 48-year-old screenwriter told The Sun Online: "When I saw the blood it put the fear of god into me.

"My blood pressure was massively high and I thought I was going to have to give birth months earlier than expected."

Betsey was fine and now her mummy and daddy are getting married (Credit: ITV)

Sharon feared she would never be a mother after having seven IVF attempts and two miscarriages, and she didn't buy any baby clothes before the birth because didn't want to "jinx" things.

She said: "Before she was born I was convinced something was going to go wrong.

"Until Betsey was actually put in my arms and I heard her let out the most almighty yell, I always felt like someone was going to say it's all going to be taken away from me.

"I'd never allowed myself to go and buy something for the baby before I'd given birth. I wouldn't even let myself look at the baby clothes in a shop. I was terrified to jinx it."