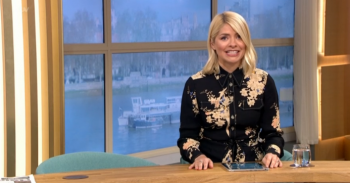 She said she found it strange

Holly Willoughby was forced to host This Morning alone today after her co-host Phillip Schofield called in sick.

The star explained to viewers that poor Phil was poorly so she had to host the entire two-hour show by herself.

Opening Thursday’s show, Holly said: “Hello and welcome to your Thursday This Morning. You may have noticed, I am all by myself.

If you’ve noticed @hollywills is all by herself today, here’s why…

“Phillip is not well today, so we are wishing him lots of love and hope he is better soon.”

The mum-of-three added that she felt strange hosting the daytime show without Phil by her side, so she decided to sit in his seat to make herself feel a bit better.

She said: “It’s so weird I came and sat here and I sat in his chair.

“It just didn’t seem right to sit in that chair and his one to be empty.  Stay with me today.

Viewers also found it strange to not see Phil alongside Holly.

One person said: “Ooo that must be a bit scary Holly! It’s like when your bezzies off ill at school. You’ve got this though.”

Another added: “Get well soon Phil… you got this holly,” while a third wrote: “Strange that there’s no stand-in for Phil, always is when Holly’s off.”

Ooo that must be a bit scary Holly! It’s like when your bezzies off ill at school. You’ve got this tho 💖

Get well soon Phill …. you got this holly 😁

Strange that there’s no stand-in for Phil, always is when Holly’s off #ThisMorning

The day before, Phil had dropped the s-bomb while dropping his pancake during a relay race.

On Wednesday, the pair discussed Lent – the six week period leading up to Easter – and whether they would be giving up anything themselves.