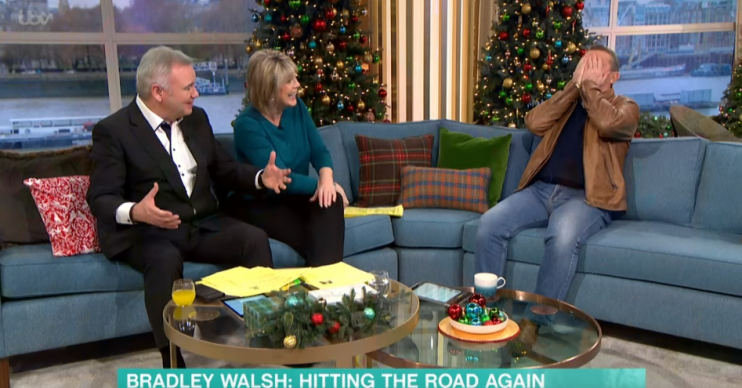 They were discussing Bradley riding a bull in a Rodeo

Bradley Walsh was in fits of laughter when Eamonn Holmes made a series of innuendos on This Morning today.

The Chase presenter appeared on Monday’s show to discuss the second series of his hit show, Bradley Walsh and Son: Breaking Dad – which he stars in alongside his son Barney.

A clip was shown of Bradley and Barney visiting a Rodeo show which Bradley took part in.

As cameras returned to the studio, Eamonn said: “Bradley, I love Rodeo and I love watching it all but not to do it mate. It’s not for the likes of us.”

Bradley said: “But if Barney is going to do it, you know what it’s like with your kids… you go, ‘alright fair enough.'”

Eamonn exclaimed: “He could have killed you,” to which Bradley revealed: “This new series there’s bumps and scrapes along the way. It’s more extreme than the last one.”

Eamonn asked: “What’s it like to have a bull between your legs,” as his wife Ruth Langsford and Bradley started laughing.

The Irish presenter continued: “That is absolutely incredible. How do you control that beast?”

Covering his face with his hands, Bradley struggled to compose himself. It’s an amazing, massive block of meat with horns. It’s just awful.

“I admire anybody who could do it but I couldn’t do it myself. Do you not get on that thing and think, ‘I’m going to die’?”

It’s an amazing, massive block of meat with horns.

Laughing, Bradley said: “I actually… I… what was the question?”

Elsewhere in the interview, Bradley tried to encourage the hosts to do The Chase.

He said: “Why won’t you come on The Chase? What’s the matter with you?”

‘I’ll worry I’m going to do a Piers Morgan!’

Sounds like we won’t see Ruth and Eamonn on #TheChase any time soon! pic.twitter.com/oHSlsMGoaU

Eamonn said: “Because when you reach 60, you’ll find out I know all the answers eventually…” to which Ruth cut in: “Slow.”

Ruth said: “I watch it from home and I think I’m quite good. But then I worry I’ll do a Piers Morgan,” referring to the moment Piers appeared on the show and struggled to answer the questions.