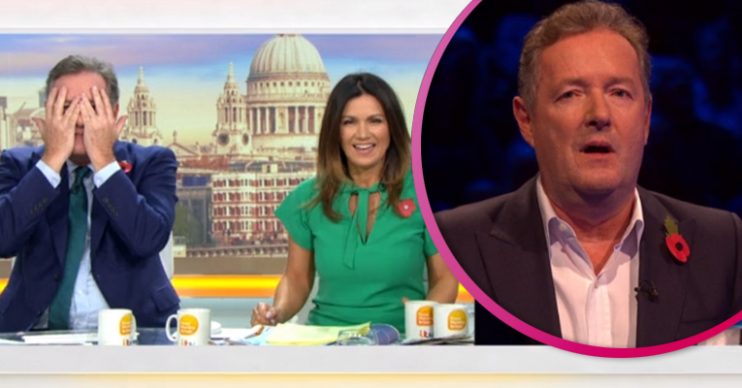 He didn't do too great

TV presenter Piers Morgan was left squirming as he was shown a clip of his appearance on The Chase.

During Wednesday’s Good Morning Britain, a clip of the star, Susanna Reid, Kate Garraway and Richard Arnold’s stint on the game show was shown and Piers was left covering his eyes when the footage played.

For the first question, Piers, 54, was unable to identify Cockney rhyming slang for an egg in the clip.

He said: “I had a brain freeze, totally,” to which Susanna told him: “I would say it was more of a minor nightmare on the show.”

Piers continued: “I thought it was a horror story. The first question completely threw me. It was cockney rhyming slang. I didn’t know what it was and that then threw me for about three questions.

I didn’t know what it was and that then threw me for about three questions.

The clip then played, showing Piers failing to answer the first few questions but still bagging £3,000 in his cash builder round.

In the footage, host Bradley Walsh asked Piers: “In Cockney rhyming slang, borrow and beg refers to what breakfast food?”

Back in the studio, Piers said: “[Susanna] was loving it,” to which Susanna insisted: “I wasn’t loving it. I felt for you.”

Piers said: “Genuine question: Borrow and beg. I didn’t know what that was.”

Read more: GMB viewers over the moon as Piers Morgan returns after they feared he’d been ‘sacked’

He added: “But [the show] didn’t end there. Let’s just say other people emerged with more wreckage than I did.”

After showbiz correspondent Richard was caught by the chaser and sent home, Piers said on today’s GMB: “If only the worst thing was that Richard went for the easy low money, what would be worse than choosing the deliberately lower amount and then apparently leaving the building.

“The good news is, Miss Smartypants unfortunately did do very well.”

Susanna said: “I rescued you!”