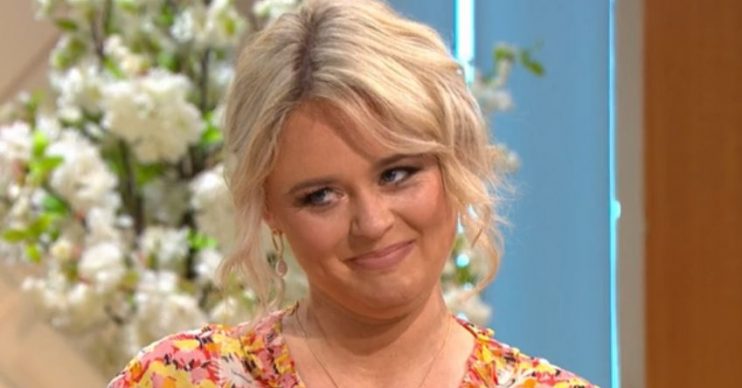 The star was on to chat about her new programme, Adulting

Telly fans have called out presenter Lorraine Kelly for suggesting that Inbetweeners star Emily Atack, who turns 30 later this year, is still a “baby”

The I’m A Celebrity runner-up was on Lorraine’s chat show to talk about her new programme, Adulting, which sees her exploring the difficulties of becoming a grown-up.

Read more: Emily Atack reveals she fears she won’t be able to have babies

After airing a clip from the show, Lorraine asked her if she feels like an adult.

Emily said: “I feel quite grown up in these kinds of environments, when I’m sitting up straight, I’m on the telly and I’ve got my telly voice on.

“I’m doing an interview. I feel a bit grown up in that moment. So I sometimes do, but most of the time, no…”

Lorraine replied: “I don’t blame you. I’m still waiting to grow up. You talk about lots of things in this series. You’re very open, very honest.

“That’s why people like you. You talk about being a bit broody. I mean, you’re a baby, you’re not even 30 yet. You’re a child.”

Viewers took to Twitter to blast the host for her comments.

Another wrote: “She’s a grown [bleeping] women #Lorraine you idiot.”

A third tweeted: “She isn’t a child you wittering [bleep]sack. She’s nearly 30 #Lorraine.”

Someone else commented: “No she’s not a baby, Lorraine, she’s 29 #Lorraine.”

ED! has reached out to reps for Lorraine and Emily for comment.

Elsewhere in the interview, Emily talked about the upbringing she got from her famous mum, singer and Crossroads actress Kate Robbins.

Emily said on Lorraine: “I was just so loved. I was smothered with love, maybe too much sometimes. It was chaotic in the household, but full of love and laughter.”

Asked about her appearance on I’m A Celeb and how it helped to improve her body confidence, she explained: “There’s now a pressure to love yourself all the time. It’s very hard. I am flying a flag at the moment for body confidence.

“But I’m also highlighting the fact that we’re not going to feel completely happy and content in ourselves all the time, and that’s fine.

“I have days, even though I’m much more self-accepting now, I still have days where I wake up and I’ve put on a few pounds and I feel a bit rubbish about myself.”