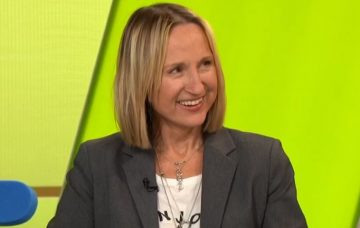 She assured fans all was okay!

The 58-year-old recently returned to Loose Women after five years away, reuniting with former colleagues such as Kaye Adams, who also hit back at the headline.

Carol wrote on Twitter: “It is so ridiculous it actually made me laugh.”

She added to another fan: “Don’t get upset because no one’s bullying anybody.”

She then quipped: “Meeting Carol for lunch Thursday – we can throw bread rolls at each other.”

Carol made her return to Loose Women in July, five years after her last show in 2013.

She told the panel: “I seriously can’t believe it. It feels really odd. A hell of a lot has happened as you may have read. I did Celebrity Big Brother, didn’t win thank God, did alright. Then I got sick, I had breast cancer, I lost my hair and I lost a boob, then I was really ill for about two years getting over it.

“I sold my flat in London and I bought a house in France, and then I had a facelift and then I came back to Loose Women.”

Carol was diagnosed with breast cancer in early 2014 and underwent chemotherapy and radiotherapy, as well as a mastectomy.

She has said she plans to have reconstructive surgery this year: “It’s all part of feeling normal I suppose. After you’ve had all that, you don’t know what normal is anymore.”

The star had a facelift before returning to Loose Women, saying it was to “make myself feel better about myself looking in the mirror.”

Carol recently told Best magazine that she’s planning to stick around on Loose Women for a while and has other projects in the works.

Discussing her plans for the rest of the year, she said: “You’ll be seeing a lot more of me on the television. I’ll be doing more Loose Women shows and [my fiancé] Mark and I are doing a lot of things I said I’d never do, like going on a cruise that starts in Miami, a place I said I would never go back to!”

They marked the occasion with a romantic trip to Venice – aww!

Really missing @cassola21 but will be here tomorrow. This is my favourite picture of us ever #Venice #taxi #10thanniversary #celebrations

Carol announced her engagement to Mark in 2008 and has frequently said they’re in no rush to walk down the aisle, although they will marry at some point.

She told Loose Women recently: “”I’m still with Mark, can you believe. He is amazing. He’s still with me. I’m a nightmare anyway. I don’t know how he puts up with me, seriously.

Do you enjoy having Carol back on Loose Women? Leave us a comment on our Facebook page @EntertainmentDailyFix and let us know what you think!