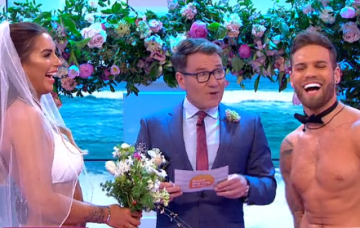 And right before the end credits, it emerged the celebrities in question were Jess and Dom.

The couple, who met on the last series of Love Island, got engaged after leaving the villa.

They arrived on the GMB set fully clothed for an interview, where Jess spoke about having no plans for Valentine’s Day as family are staying, before Dom let slip he’s booked a secret European mini break for afterwards. How romantic!

“We have been luckier than some of the other couples,” said Jess, when it was pointed out they’ve lasted longer than many other villa pairings.

“I think we went through all the drama when we were in the villa and first came out.”

Jeremy then interrupted to ask: “Do you want to get married now?”

Dom replied: “It’s Valentine’s Day so let’s go for it!”

Jeremy then shouted: “I need a vicar! Someone bring me a vicar!”

Enter Richard Arnold, who had coincidentally just been ordained! “I’m not sure what particular institution of church I’ve been ordained into. We have two rings, a beautiful loving couple.

“Do you fancy being spliced live on Good Morning Britain?”

Paying tribute to their Love Island roots, the couple stripped to white swimwear before saying their (very funny) vows.

Then came the kiss as Richard declared them the first-ever Love Island husband and wife!

Of course, it wasn’t legally binding, and the couple then said they would be tying the knot for real in a Mykonos ceremony – joking Richard was more than welcome to fly over and take part!

Some GMB viewers, however, called the ‘newlyweds’ “cringe” for taking part.

Hey, you can’t please everyone, right?

Would you ever get married on TV? Leave us a comment on our Facebook page @EntertainmentDailyFix and let us know what you think!