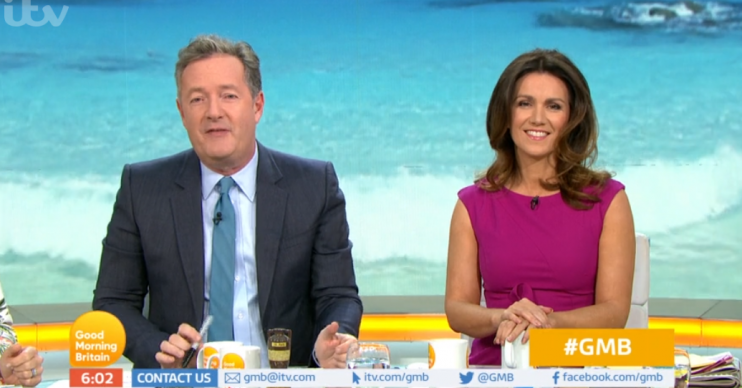 They will be back in September

Piers Morgan and Susanna Reid are now officially on their summer break.

The pair revealed on Wednesday’s Good Morning Britain that they will be back on screens on September 2 as they enjoy a six-week break with their families.

Ahead of today’s show, Piers wrote on Twitter on Tuesday: “UPDATE: Tomorrow is our last day on @GMB until September 2.

“So @susannareid100 & I intend to make it a memorable one…and to help us, we have the brilliant @benstokes38 live in the studio for his first big TV interview since winning the World Cup.

“You won’t want to miss this.”

On today’s show, Piers said: “Good morning Britain, this is it, our last show until September 2.”

As Susanna could be seen playing with her hair, Piers asked: “Are you alright Susanna? A bit flustered?” 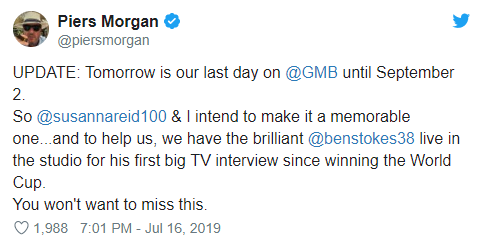 She replied: “Yeah, my hair has just gone a bit big. It’s our last morning and I thought I’d go big hair. It’s gone a bit too big…”

Piers continued: “Good Morning Britain will still be here though under the safe pair of hands of Charlotte Hawkins.”

Charlotte said: “And here throughout all the summer,” to which Piers joked: “Maybe let’s not promote that. Just let it happen organically.

“Let people stumble across you, hoping the expectation is me then having a little tiny bit of disappointment.”

Charlotte cut in: “I would like to make an appeal to all those viewers who maybe choose not to watch when you’re here.

“They can come back to the fold and we’ll welcome them in.”

Viewers were gutted to see Piers and Susanna go for six weeks.

One person wrote on Twitter: “Well the show is gonna be boring without you,” while another said: “That’s me turned off until September. Your guest presenters are truly awful.”

A third tweeted: “This is the saddest news ever, best part of the day is seeing you too.”

A fourth begged: “Gutted… Don’t go Piers we love you.”

It looks like Charlotte is getting fired up for a summer without Piers! ❌👕@piersmorgan | @CharlotteHawkns | #GMB pic.twitter.com/jqfVb2oQcT

However, others were looking forward to having Charlotte on the show and were glad to be getting a break from Piers!

One person said: “Piers away… tune in!” while another wrote: “Looking forward to the lovely Charlotte, Kate & Ben…. and no cricket talk!”

Will you miss Piers and Susanna? Leave us a comment on our Facebook page @EntertainmentDailyFix and let us know.