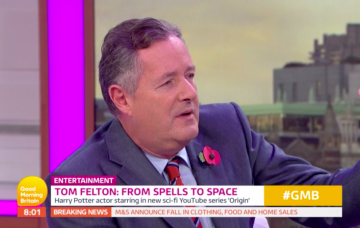 The apple falls quite far from the tree

Whether you love Piers Morgan or hate him, the nation was united this morning over the hotness of the TV star’s son.

Spencer Morgan, 25, made a cameo appearance on Wednesday’s Good Morning Britain, and viewers piled in to call him “hot” and ask if he’s single.

He appeared on camera during an interview with Tom Felton. Piers, 53, revealed that Spencer was such a huge Harry Potter fan and had insisted on coming in to meet the Draco Malfoy actor.

In fact, Spencer has a Harry Potter tattoo on his arm, which he showed off for the camera.

Piers revealed: “He has never wanted to see me in action on this programme in his life. Has no interest in anything I’ve ever done in my life.

A 'magic' moment with Piers Morgan's son today 🎩 🔮Getting up very early for Harry Potter star Tom Felton, but maybe not so much his dad 😄 pic.twitter.com/zUNUlkUXqS

“But he has a Harry Potter tattoo – Spencer. And he has come in today, at this ungodly hour, just because he has heard you’re on the show.”

Viewers watching at home were delighted, rushing to gush about how good looking Spencer is.

One wrote: “So @piersmorgan’s son is far better looking than he is 😂😂 and he loves #HarryPotter. Way to go @spencermorgan93 !! @GMB.”

Another wrote: “Anyone else notice how good looking @piersmorgan son is on #goodmorningbritain,” while one tweeted: “Woaaahhh @piersmorgan Son is HOT!! 🔥🔥🔥😍 @GMB Piers bring him in every week! 😍.”

A fourth pleaded: “Dear lord @GMB can I make a request please? Next time @piersmorgan is ranting a little too long, can we just cut to an image of his son, to show the nation the good Piers has created. #MoveOverAidenTurner #WhatALooker.”

Another even asked: “Ok so is @piersmorgan son single??”

Spencer – as well as his two brothers Stanley, 21, and Albert, 17 – are Piers’ kids from his previous marriage to Marion Shalloe. Piers is now married to author Celia Walden, and they share six-year-old daughter Elise.

Read more: Everything we know about Susanna Reid’s new man

Spencer seemed to be loving his new fame, taking to Twitter to retweet headlines about his good looks.

His celeb pal, Made In Chelsea star, Georgia ‘Toff’ Toffolo replied to his tweet, writing: “I’m so confused wow.”

He also shared a picture of himself sitting at the desk, with his friend Sam and the presenters, Susanna Reid and his dad.

He captioned it jokily: “Coming after the break… Some huge breaking news as Sam and I reveal our plans for Friday night. Stay tuned.”

Coming after the break… Some huge breaking news as Sam and I reveal our plans for Friday night. Stay tuned

If you’re wondering, Piers did eventually actually interview actor Tom, too. But first he told him he’d never seen any Harry Potter films, adding: “You mean little to me.”

Where do we start a petition to get Spencer as a regular on Good Morning Britain? We have a feeling there would be plenty of signatures…

Were you charmed by Spencer? Leave us a comment on our Facebook page @EntertainmentDailyFix and let us know what you think.