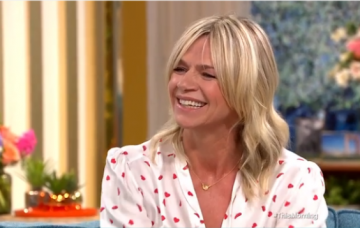 Speculation is already rife about who will appear on this year’s Strictly Come Dancing.

But if you want to know the answer, don’t ask Zoe Ball, who has admitted she’s just as in the dark as the rest of us!

The Strictly: It Takes Two presenter told Holly Willoughby and Phillip Schofield that she never has any idea who she’ll be interviewing on the spin-off show until the contestants are officially announced.

“They never tell me anything as I have a big mouth, as you know! So I am none the wiser!” she said when Holly and Phil asked her if she had any idea about the 2018 celebrity line-up.

Zoe said she has to read the papers and social media for clues – and has found in the past that sometimes stories are accurate but on other occasions wide of the mark.

“Last year there were rumours of Scarlett Moffatt and Joe Wicks and neither of them did it,” she said. “But sometimes the rumours are true so you just have to wait and see!”

So far this year, names in the frame include Radio 2 DJ Anneka Rice, Bake Off champ Nadiya Hussain and football pundit Chris Kamara.

“Who is going to be the next Debbie McGee that’s what I want to know,” Holly said to Zoe today.

Zoe appeared on This Morning to promote her new weekend show, which is on ITV on Saturday and Sunday mornings.

The mother-of-two also talked about her recent challenge for Sport Relief, where she raised more than £1m by cycling 350 miles from Blackpool to Brighton.

She did it in memory of her late boyfriend, Billy Yates, who died last year.

Zoe said: “I feel so grateful to have had the opportunity to do something for Billy, his family and other people who have gone through this experience or are living with mental illness.

“We need to do more to understand it and make it a subject we can talk about openly.”

She added that she’s still getting letters and messages on social media “every day” from people whose lives have been affected by mental health problems.

Who would you like to see on this year’s Strictly? Leave us a comment on our Facebook page @EntertainmentDailyFix and let us know what you think!