They've been photographed together again

Sam was left reeling after she admitted cheating on him during an action-packed episode.

But now the pair have been pictured together since the split and fans are asking what’s going on.

Are Zara McDermott and Sam Thompson back together?

The pair were photographed sitting on a park bench filming new scenes for the reality show.

And at one point Zara was seen wiping away tears.

On October 31 Zara left a message on her Instagram feed, which seemed to express undying love for her ex.

And I’ll choose you over and over. Without pause, without a doubt, in a heartbeat. I’ll keep choosing you.

“I choose you,” she said in the caption.

“And I’ll choose you over and over. Without pause, without a doubt, in a heartbeat. I’ll keep choosing you.”

There’s no word yet coming from either camp on whether they’ve managed to patch up their differences.

Why did they break up?

The reality star revealed that she cheated on Sam during the filming of The X Factor: Celebrity last year.

Her infidelity happened six months into their relationship, and although they split in September, viewers are only just now seeing the full drama unfold. 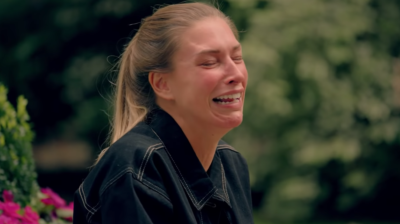 Did Zara and Sam really split up?

This is the question fans are asking: did they really split up?

As we all know, reality TV is scripted to some extent and planned ahead.

Although the drama looked emotional and very real, Zara’s proclamation of true love seems to suggest nothing has changed in that department.

And while Sam has remained quiet over the episode, the fact that they’ve been pictured together have got fans talking again.

Some suspicious-minded viewers think the couple may have been involved in a publicity stunt.

One accused on Twitter: “They needed a storyline to fake a break up to add drama to a show. Sam and Zara are so desperate. Publicity stunt from the start.”

A second postured: “Urghhhh I am so sure the Sam & Zara split-up was all for the new season & a publicity stunt.”

A third asked: “Soz but am I the only one who thinks the whole Zara and Sam break up is CLEARLY a publicity stunt?!?!”

Whatever, it’s got us all gripped!