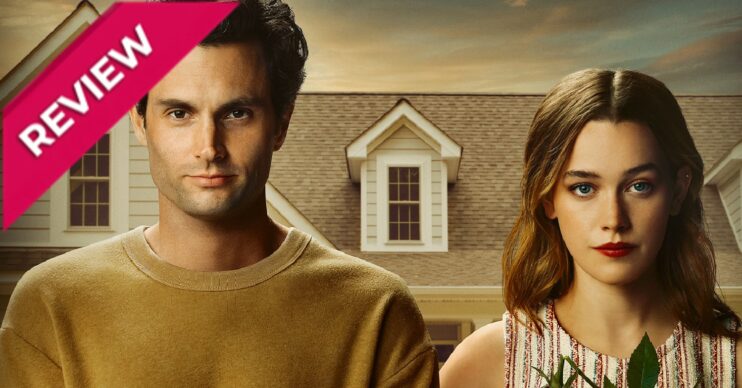 You season 3 review: Penn Badgley psycho-killer drama as bloody good as ever

The killer librarian is back - but he has company.

Joe Goldberg and his stalker baseball cap are back for You season 3 – and this time they have a wife and baby in tow.

Picking up immediately after the end of season two, Joe (Penn Badgley) and Love (Victoria Pedretti) are trying their best to settle in suburbia. Leaving their multiple murders behind, they want to be a ‘real family’ for son Henry.

Only, two psychotic killers were never destined to feel comfortable in a white-picket fence town, and they know it. Best friends with a mummy blogger and an alpha male who likes to be ‘at one with the woods’? Gossip sessions at the local coffee shop? We don’t think.

They’ve even brought along their good ol’ see-through basement box just in case. That hardly screams ‘here to behave’.

It doesn’t take long for things to start falling apart for them both at a rapid rate. For Love, her jealousy starts eating away at her. For Joe, its his insatiable desire for another woman.

Both these things bring about their killer instincts. For better or for worse has never been more apt.

Read more: Check out the latest news on Netflix here

But it turns out they’re not the only ones with secrets behind closed doors. And soon, they are being drawn into a whole mess of situations as things spiral out of control.

The series has its faults and can er on the side of melodramatic but, despite the subject matter, it’s always fun. Thankfully, this is still the case with You season three.

Badgeley’s annoyingly likeable psychopath continues to be easy to watch. But he’s problematic, gaslighty and the continued attempts of him justifying himself, this far in, doesn’t slide so well anymore.

But so too, is his unhinged wife on-screen wife, played by Pedretti. She may not have as much method behind her madness, but the painful lengths she goes to to keep her sham of a marriage afloat becomes completely unpredictable.

Their marriage is a doomed mess and she just refuses to accept it, which only worsens over time.

Oddly, their behaviour does somewhat make them a perfectly matched couple. A couple of serial killers, yes. But a couple all the same.

Is You season 3 worth the watch?

For anyone who watched the twisted first and second seasons, You season three holds up as a great addition to the story.

Upping the ante in ‘how will they get out of this?’ stakes every time, there is one of those dramas that consistently keeps you on your toes. Even when, by all accounts, it treads some pretty common territory.

Penn Badgley has a perfect scene partner in Victoria Pedretti, as their likable personas continue to slip away among suburbia.

Yes, the story takes a turn for the melodramatic and slightly unrealistic, but then again, it always has. Joe is not a blueprint for a good man, and Love not one for a devoted woman.

By the time the final credits roll, you’ll be satisfied.

You season 3 is available on Netflix now