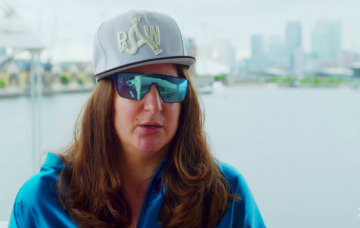 What would Simon Cowell think now?

But the wannabee rapper – real name Anna Gilford – has unveiled a “sexy” new look, which bears little resemblance to the person who auditioned in front of Simon Cowell in 2016.

This week, the former recruitment consultant showed off her curled brunette hair and slimmed down physique in a series of new photos.

Wearing a black all-in-one and heeled-boots, you’d be hard pushed to find anything connecting her to her brash alter-ego.

Unsurprisingly, many of her supporters were quick to send words of encouragement, with one typing: “Stunning lady.”

Another said: “You look beautiful! When are you coming to the USA?”

“Miss the old Honey but love the new you,” admitted one more.

Honey G became one of The X Factor’s most divisive performers alongside Jedward, Katie Waissel and Rhydian Roberts, when she rapped her way to fifth place on the ITV talent show five years ago.

Behind the mask, she was later revealed to be a middle-class recruitment manager from Harrow, with a passion for tennis and a master’s degree in management.

After attempting to launch a successful solo career, she went on to work as an estate agent before claiming she was sacked for being too famous.

She also performs as Honey G at LGBT events after coming out as a lesbian three years ago.