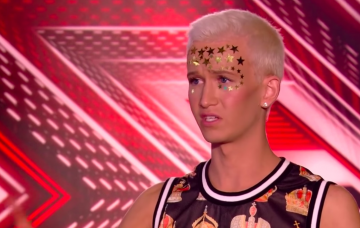 In disturbing news, X Factor star Bradley Hunt has revealed he was beaten up in a nightclub attack that left him battered and bruised.

In a video he shared on YouTube, the reality show contestant showed his cuts and bruises as he admitted he “panicked,” and ran away “screaming.”

The singer – who reached the live finals of the ITV talent show in 2016 as part of duo Bratavio – said he was dancing along to Britney Spears when a man told him to stop.

In the nine-minute video, titled: “HOMOPHOBIA & INTERNALISED HOMOPHOBIA,” Bradley says: “I said to him, ‘Don’t tell me what to do.’ You don’t tell someone to stop dancing like that, I’m sorry, if you don’t like it, go somewhere else.”

At that point Bradley says he was punched, explaining: “Then came the smash right into the nose. Then two of his friends, either side ricocheting, punching, thumping me, I’ve never ever been hit before so the pain absolutely killed.

‘I had an instant headache – oh my god – and I absolutely panicked, I was screaming. I ran to the bar, crying. I could feel half my teeth in my hand and blood.

‘I jumped over the bar because I was so scared, ran down to the beer cellar and was on the floor in tears and panicking. Obviously I was drunk and it just came as a shock to me.”

After ringing the police, he said they arrested one of the lads, but “nothing really happened.”

He went on to discuss homophobia he’s experienced in the past, saying: “I’ve been spat at from a car… It was disgusting. I’ve felt like a piece of [bleep], and that’s all I was to them.”

The singer – who formed one half of pop group Bratvio on X Factor, mentored by Louis Walsh – also shared a series of disturbing pictures from the aftermath of the attack.

It showed Bradley’s bruised and bleeding face, with an open cut across his nose. He also shared the horrifying montage on Instagram, captioning it: “ATTACKED for dancing to #BritneySpears in Popworld! #homophobia #lgbtq🌈 #lgbt #pride #pride🌈.”

The star’s fans rushed to offer their support, with one commenting: “You are amazing, an inspiration to loads of people, we love you. Just ignore the guy. You’re loved and your family love you! Ily so much Brad 💖💖💖💖💖.”

Another said: “Hope you’re okay, that must’ve been horrible, it’s really sad how mean people can be, as I said, I hope you’re okay now, love ya x.” A third added: “Some people are disgusting. Hope you’re okay💔.”

Others applauded him for bravely speaking out, saying: “Well said Bradley, I wish the world had more people like you, it would be a much better place 😀 xx.”

While some slammed the people responsible for the attack, writing: “That’s an absolute disgrace, they’re evil vile waste of spaces.” Another said: “Vile vile creatures, get better soon Brad xx.”

Are you shocked by this incident? Leave us a comment on our Facebook page @EntertainmentDailyFix and let us know what you think.