The daytime show was cancelled for good on Wednesday

Former X Factor contestant Lucy Spraggan has urged ITV to alter the way they “see their responsibility to the people on your shows”.

She took to Twitter to share her thoughts following news the broadcaster has axed The Jeremy Kyle Show after the death of one of its guests, Steve Dymond.

It’s understood that Mr Dymond had approached the show in an attempt to prove he hadn’t been unfaithful to his partner, Jane Callaghan, but he failed the lie detector test and his relationship ended.

Days after the episode was filmed, Mr Dymond is believed to have taken his own life last Thursday.

ITV announced today it has permanently scrapped the programme after criticism from Mr Dymond’s family and viewers. 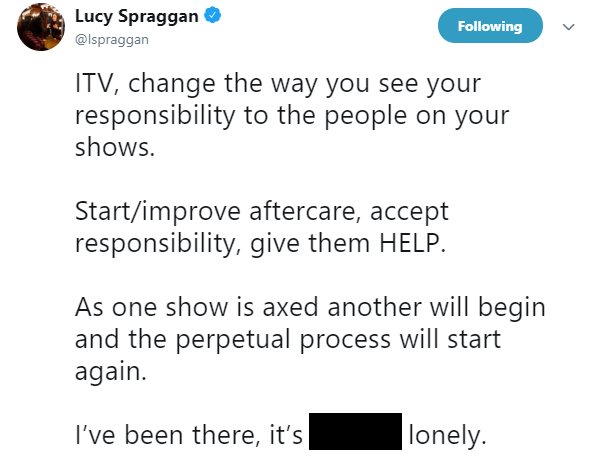 Following the news, a string of guests have spoken out about how they were treated on the show.

Dwayne Davison, who was branded the “most hated guest”,  said he took some of his girlfriend’s medication and blacked out on the bathroom floor last year after having enough of criticism over his appearance on the show.

Read more: Jeremy Kyle’s ‘most hated’ guest admits he was pushed to suicide

Fergus Kenny, a veteran with PTSD, claims he also nearly killed himself after he was told by host Jeremy that he “didn’t deserve a daughter” when he appeared on the show.

Meanwhile, dad-of-two Peter Franks has accused the ITV show of making him and wife Amanda take a fake lie detector test to prove she was unfaithful.