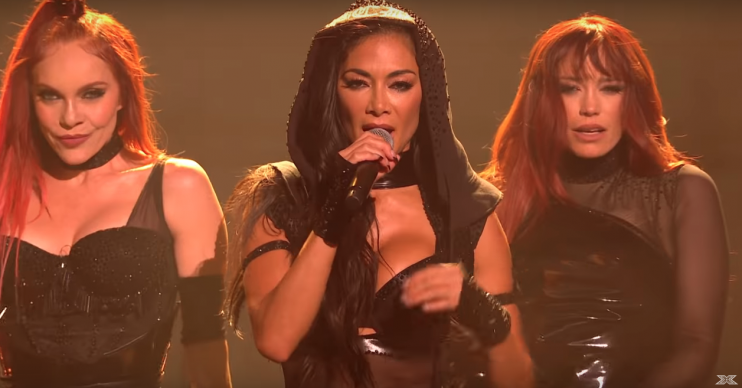 Fireworks in the final

There was a treat in store for The X Factor: Celebrity viewers last night.

Not only was the winner crowned, but fans were also treated to a surprise Pussycat Dolls reunion – the first time the girls have taken to the stage together for 10 years.

And they certainly came back with a bang with fans stunned at Nicole Scherzinger’s choice of racy outfit, with some branding it ‘inappropriate’.

Nicole, 41,  had been sitting comfortably in the judge’s seats, where eventually she, Louis Walsh and Simon Cowell voted TOWIE star Megan McKenna as the winner of the competition.

NO ONE CAN DO IT BETTER!

Read more: Simon Cowell comforted by partner Lauren as he breaks down in tears on The X Factor: Celebrity

Melody Thornton, 35, was not present.

You don’t have to take your clothes [off] to be successful.

The ladies wowed the studio audience and viewers at home, with Nicole wearing a PVC bikini with a sheer bodysuit.

It wasn’t long before viewers took to Twitter to register their shock at Nicole and the band’s choice of racy outfits.

Blimey, you wait 9 years for a comeback and Nicole forgets her trousers! #XFactorCelebrity https://t.co/mtzOuTgQP3

One wrote: “Nicole is leaving absolutely nothing to the imagination there!

“How many Ofcom complaints will there be for the Pussycat Dolls?” another asked.

The outfits the #pussycatdolls are wearing on #XFactorCelebrity are totally inappropriate for 8.15pm on a family show. Not good role models for girls. You don't have to take your clothes to be successful.

Some viewers, who were watching with their kids, worried that the outfits were not appropriate for that time of night.

“The outfits the Pussycat Dolls are wearing on The X Factor: Celebrity re totally inappropriate for 8.15pm on a family show,” one wrote.

“Not good role models for girls.

“You don’t have to take your clothes [off] to be successful.”

Did you think Nicole’s outfit was too much? Leave us a comment on our Facebook page @EntertainmentDailyFix and let us know what you think of this story.