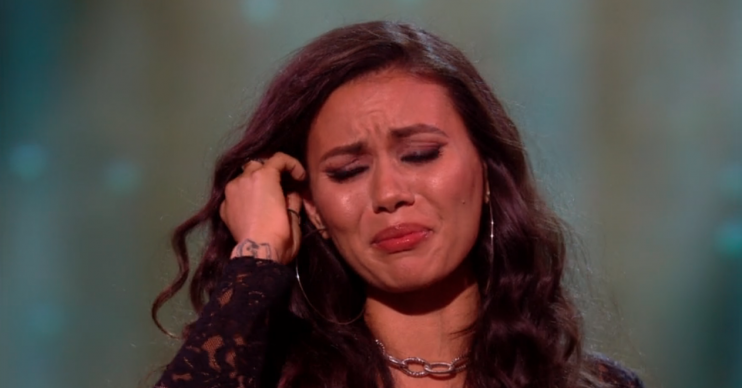 Annoyed fans plan to turn over to Strictly next week

X Factor: Celebrity fans could not believe what they were watching last night as Simon Cowell sent Olivia Olson packing – rather than Martin Bashir.

The veteran Mr Nasty of reality TV showed he can still stir it up as he gave his casting vote from the judging panel and decided to boot out the sobbing 27-year-old Love Actually star, insisting he believes viewers consider journalist Martin the more entertaining performer.

However, social media reactions would suggest Simon does not have his finger on the pulse in this instance – with thousands of Twitter users furious at his claims and many suggesting they would not be watching again.

“Someone needs to remind Simon that his show is about singing, who is the best singer. Olivia was miles better than Martin, he just saved him for ratings but it’s doing the opposite #XFactorCelebrity,” one complained.

Another fumed: “I cannot believe that Simon Cowell put Martin through over Olivia! What a complete disgrace think it’s time to stop watching this farce #XFactorCelebrity.”

Another person seethed: “I love watching Simon, but tonight I did not like what I saw. I like Martin but he sure was not better than Olivia. Simon is messing with peoples lives. It is a talent show, you should be ashamed Simon, making her cry like that.”

Other angry observers suggested such strange decisions could be responsible for sending viewers over to the Beeb instead.

One wrote: “Hmm, let me think.. what do the public want to see? Olivia or Martin Bashir… Oh really Simon?.. Back to Strictly next week then #XFactorCelebrity.”

Another confused viewer added: “Cant believe Olivia was sent off over MB, think I will change over to Strictly!”

And another dissatisfied customer contributed: “Poor Olivia – cannot believe we will have to watch Martin Bashir next week, does he think the public is stupid, time to switch over to BBC next week – strictly here we come !!! Goodbye XFactor!, #XFactorCelebrity.”

However, Olivia – who had been unable to contain her disappointment and sobbed after hearing the result – sounded a defiant note on social media this morning as she admitted she was shocked to leave.

Sadly @OliveOlson was our second #XFactorCelebrity act to go home tonight! 😭Show her your LOVE by watching her FANTASTIC rendition of Dionne Warwick’s classic ‘Anyone Who Had A Heart’ ❤️

She continued: “I’m grateful for the opportunity as it has completely pushed me out of my comfort zone, reminding myself I love to be up on that stage.

“That being said, yes my elimination came as a shock. I was confused why Simon would tell me I could win this competition and then ultimately send me home.

Ricki Lake’s elimination just before Olivia’s proved to be a little less controversial – and it seems the former chat show host was prepared to go.

“I guess I have to stick to my day job,” she shrugged.