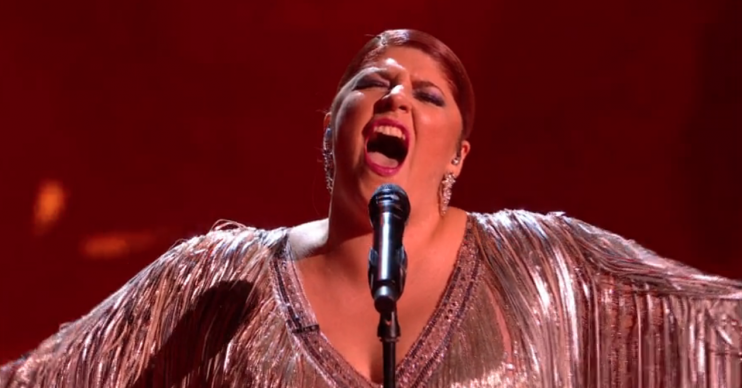 Another viewer also took issue with her facial expressions

The Chase star, 37, hit back at several critics on social media by responding with a GIF showing her Vixen character looking decidedly unimpressed.

But she also made it very clear any accusations she was ‘miming’ during her powerful rendition of Conchita Wurst’s Eurovision-winning song Rise Like a Phoenix were not accurate.

“I was not miming,” the quiz ace replied to one person on Twitter who thought her singing ‘didn’t look right’.

She continued, firmly: “The performance was live. I refer you to the hundreds of people in the studio who can attest.

“Perhaps check the sound settings on your television set if they are not in sync with visuals.”

Jenny also slapped down another social media user who took issue with her facial expressions on the ITV talent show.

Correcting the person earlier today – who had questioning whether she was either ‘in pain’ or ‘constipated’ – Jenny insisted the powerful tune required considerable exertion.

“It’s impossible to sing a song that big, to technically place all the syllables and notes so that you sound clear AND to express the powerful lyrics (esp. when they mean something to you) without ‘pulling faces,'” she tweeted.

Most viewers, however, were blown away by the bravura display – and the judges were similarly impressed.

Given a standing ovation by the astounded Louis Walsh, Simon Cowell and Nicole Scherzinger, Jenny was even offered a ’Safe Seat’ in the competition by the former Pussycat Doll.

And Simon also admitted the reverse ferret decision to bring her to the live shows after she had initially failed to make it to that stage was the right choice.

“I also just want to say… Jenny I tried to keep you in the competition,” he said.

Indicating Louis and Nicole, he continued: “It was these two who kicked you out. It was true.”