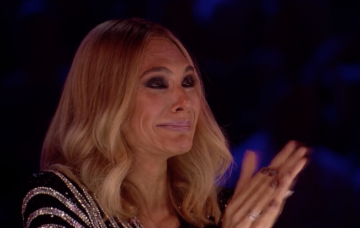 X Factor’s Ayda Field breaks down on The X Factor

Danny Tetley's emotional performance brought back of her late dad

Ayda Field broke down in tears as Danny Tetley performed My Way on The X Factor.

The judge sobbed as she told the hopeful that her late father would be voting for him from heaven.

Frank Sinatra’s classic song clearly brought memories flooding back for her, and Danny was praised for an emotional rendition.

Ayda, who is married to fellow X Factor panellist Robbie Williams, said on Saturday night’s show: “Danny, I know you love me, but I love you more.

“I know my dad is up in heaven and he’s picking up that phone for you.

“And I hope all of Bradford, all of the UK, picks up the phone for you because you had the moment of the show and I’m so proud of you.”

It was all the more tragic because his death came not long after a reconciliation with his daughter.

After separating from Ayda’s mum, Haldun moved back to Turkey and later remarried and had a second family.

The X Factor judge flew to Istanbul to meet him when she was 26 and the pair became close.

Meanwhile, Danny’s performance last night was also praised by Simon Cowell who embraced him and gave a peck on the cheek.

Simon told him: “I thought you were amazing. And you deserve everything, you’re a great guy.

“I actually felt very emotional during that. You are a total star for that.”

The X Factor continues at 8pm tonight on ITV.

What did you think of Danny’s performance? Leave us a comment on our Facebook page @EntertainmentDailyFix and let us know what you think!