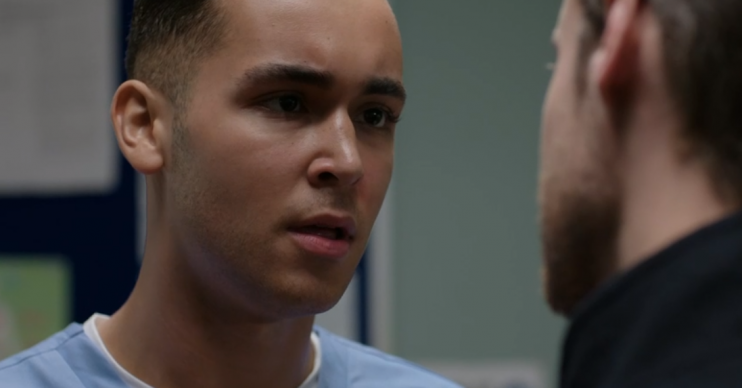 The episode aired in January

Philip Lawrence, who is a writer for popular medical drama Casualty, has hit back after the BBC confirmed a gay-kiss scene received over 100 complaints.

In the episode, which aired on Saturday January 25 2020 at 9:20pm, nurse Marty Kirkby shared a kiss with his boyfriend Jack as he explored a new romance.

The drama has been airing the storyline of Marty exploring his sexuality over recent weeks, but 111 viewers found the scene showing two men kissing to be “offensive.”

However writer Philip has hit back at those who complained.

On Twitter, the writer said: “I made some bigots uncomfortable. Boo [bleep] hoo.”

Unfortunately this isn’t the first time viewers have complained about same sex kisses in dramas and soaps.

Back in 2016, Ofcom received 26 complaints about Todd Grimshaw and Billy Mayhew sharing an on-screen kiss on Coronation Street and a total of 67 complaints had been lodged to the broadcasting regulator in the weeks before.

However the kiss was soon cleared by Ofcom as there was no need for investigation.

That wasn’t the last time the soap received criticism for same-sex kissing scenes.

Last year, Billy actor Daniel Brocklebank hit back at a grandfather who criticised him for same-sex smooches, after the soap aired Billy and Paul Foreman kissing.

The guy’s granddaughter apparently questioned what was happening, and Daniel has said the man may have affected his relative’s “psyche”.

The 39-year-old actor faced a “backlash” after Billy got up close and personal with Paul and one man was so “disgusted” about the soap snogging he sent Daniel a message airing his frustrations.

But the actor insisted seeing such a scene was the grandad’s “opportunity” to educate his granddaughter about relationships.

The cobbles star said: “He was watching with his granddaughter and was disgusted that she’d asked him questions.

“But that was his opportunity to explain to his granddaughter that relationships come in all forms.

Are you a fan of the soaps and dramas?