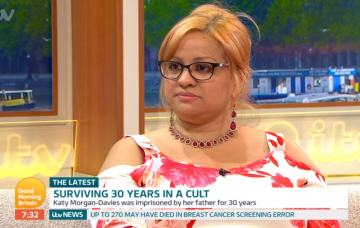 She lived inside a cult led by her father

A woman who was held captive for 30 years by her father has said she has forgiven him.

For the first 30 years of her life, Katy Morgan-Davies was living inside a cult led by her father, Aravindan Balakrishnan, and was kept hidden inside a south London home with other women.

But Katy, 35, revealed she had no idea Aravindan was her father until she fled the Brixton flat in 2013.

During her horrific ordeal, Katy was abused and controlled by Aravindan and was subjected to cruelty by her mother, one of Arvindan’s followers.

She wasn’t allowed to go to school and never saw a doctor or dentist.

Katy said she became suicidal and even made friends with the rats and mice that lived in the home because she was lonely.

Over the three decades, Aravindan brainwashed cult members by telling them if they didn’t worship him like a God, it would lead to natural disasters like earthquakes and floods.

Speaking to Susanna Reid and Ben Shepherd about her ordeal five years on, Katy said: “It was just fear and terror.”

Katy revealed she grew up not knowing who her parents were and Aravindan forced her to say she was an orphan if anyone asked.

Katy admitted she was “terrified” of her mother as she used to “spy on everything that I did and encourage the other women to spy on me and then report back to him [her father].”

She added that “normally reporting meant a beating”.

Katy’s mother died after falling from a window in the property in 1996.

Katy revealed she once managed to flee the house and go to the police.

She said the police ended up calling her dad and advised her to go back and “talk it over.”

“I thought that would make him listen and change,” she said. “But nothing changed.”

She finally escaped the house in 2013 after calling a helpline when her father was out of the house.

Aravindan was jailed for 23 years in 2015 after he was found guilty of keeping Katy prisoner and raping two of his followers.

Despite the awful ordeal she endured, five years on, Katy said she has forgiven her father.

“I forgive him because holding on to anger can only harm the person who is angry,” she said. “You can’t heal until you let go of the anger.”

When asked if she would ever like to have contact with her father again, Katy said: “He doesn’t think he’s done anything wrong.

“If he was interested in that then yes, but only as equals, not in that situation.”