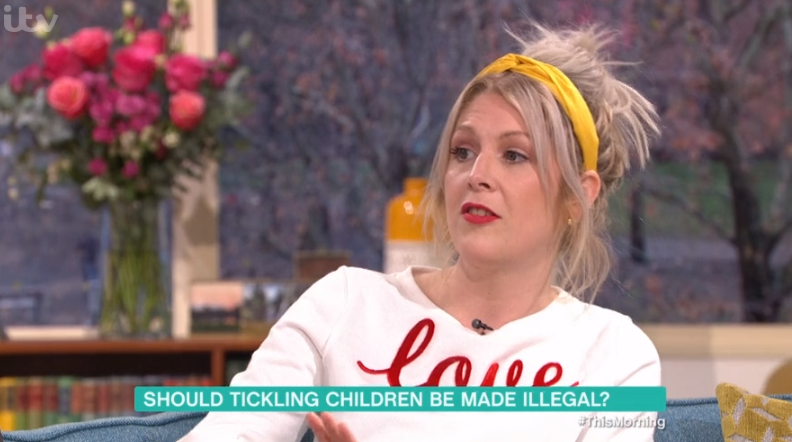 This Morning viewers were left stunned when a woman said parents should tell their baby they are going to change their nappy.

Lottie Daley appeared on Friday’s show alongside Vanessa Feltz to discuss Russell Brand declaring he wants tickling children to be banned because he believes it violates their space.

Lottie insisted parents should ask permission before tickling or playing with their children and also said she would let her baby know she’s going to change her nappy.

Read more: Phillip Schofield and Holly Willoughby apologise for chaos on This Morning

She said: “When you start learning about body autonomy and consent for our children when they become a bit older, we should be modelling this behaviour from birth, like letting your baby know you are changing its nappy.”

Lottie replied: “Yes. I want her to know it’s her body. It’s not a case of them saying ‘yes mum’ or ‘no mum’, it’s modelling that repetition and that habit of checking in with your children and making sure that they’re happy with what you’re doing with them.”

She added: “When I’m washing my daughters, who are a bit older, they are seven and five, when I’ve got to wash their bottoms, I do say, ‘Can mummy just wash your bottom?’ because sometimes you have to. And they say, ‘yes’ or ‘no.'”

When asked if she asks permission from her children to tickle them, she added: “I asked my children, ‘Do you like tickling?’ and they said, ‘Yes.’

“And I said, ‘Would you like it if someone else did it?’ and they said they would be scared because it wasn’t [me].”

She continued: “We need to rethink the wider issue of consent, it’s not just applicable to teenagers, it’s applicable from birth.”

However, Vanessa didn’t agree with Lottie’s comments and said she thinks “it’s an absolute shame to say you can’t tickle”.

She added: “You don’t tickle someone you don’t know or a child who doesn’t trust you… and start forcibly tickling. But it is the ultimate innocent love, care, fun, physical contact with a child you love and who loves you.”

Viewers were divided over the debate, with many disagreeing with Lottie.

One person said on Twitter: “The woman on this morning is everything that’s going wrong! Asking her baby for permission to change its nappy? Have a word.”

Another tweeted: What if you ask a kid if you can change their nappy, they say no, then you change it anyway? Is that setting a positive example or telling them it’s okay to do things without consent? What a RIDICULOUS argument.”

A third wrote: “What rubbish. @thismorning my seven-and-a-half week old baby cries when I change his nappy. If I stopped and left him he would be in a dirty nappy for hours.”

However, others agreed with Lottie’s comments.

One person said: “I definitely think tickling should not be allowed on children I was tickled as a child and although you laugh it feels like some form of torture. I hate it so much. I believe it causes children to have a stutter and on babies it should definitely not be allowed.” 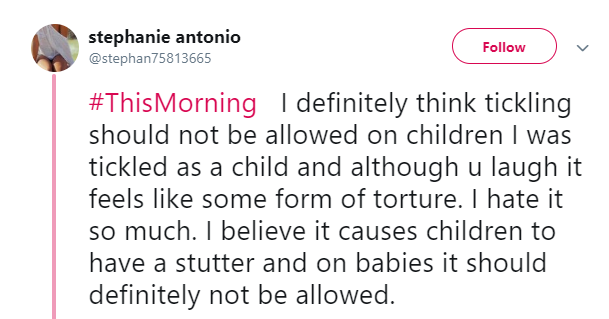 Another said: “It’s not so much about consent it’s more about teaching your kids that nobody has the god given right to touch you no matter what your age.”

Do you think tickling should be made illegal? Leave us a comment on our Facebook page @EntertainmentDailyFix and let us know.