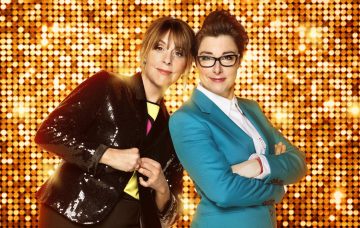 Throwing clay on potters’ wheels, spinning plates and larking about in daft costumes… it’s as if The Generation Game has never been away.

Pictures released today by the BBC show hosts Mel and Sue sticking to the tried-and-tested zaniness that made the classic 1970s series such a massive hit.

And they seem to dispel claims by Jim Davidson, who hosted the programme in the 1990s, that the duo aren’t good enough to make the reboot a success.

Mel Giedroyc and Sue Perkins are following in the footsteps of Bruce Forsyth, the original host from 1971-77 and again from 1990-94, and his successor Larry Grayson from 1978-81.

Jim, who took over presenting duties after Brucie’s second stint in 1995, said of Mel and Sue last month: “They’re not right, they won’t know how to ad-lib. They’re not there to teach them how to bake a [bleeping] cake.”

Yet, bizarrely he added: “I don’t know these women, I’ve never heard of them but you need someone that’s going to be able to ad-lib and drive the show along.

“That’s why Bruce was so good. He drove it along his way.

“He was the energy. You can’t remember any of the people on it, all you remember is Bruce.”

But as these pictures show, it doesn’t look like the new version is missing any of the old fun factor.

Naturally, the conveyor belt returns, with top prizes and, of course, a cuddly toy.

* The Generation Game is on BBC1 at 8pm on Easter Day.