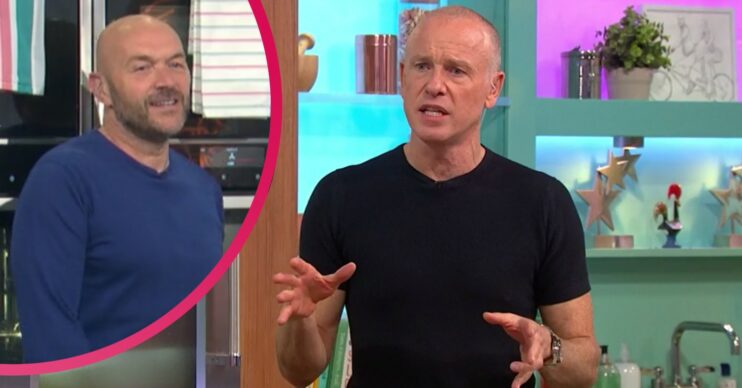 Why is Simon Rimmer not on Sunday Brunch? Presenter replaced today

His replacement got a mixed reaction on social media

Inconsolable Sunday Brunch fans were gutted that co-host Simon Rimmer was not on the Channel 4 programme today.

Viewers tweeted how the show is ‘not the same’ without the celebrity chef being on hand.

And Simon‘s replacement Miquita Oliver has certainly drawn a mixed reaction on social media from those watching at home.

While many hailed the former T4 star’s presenting style, she also came under fire for being “cringeworthy”.

Why is Simon Rimmer not on Sunday Brunch today?

Regular co-host Tim Lovejoy did not go into much detail when he announced Simon’s absence at the start of the show.

Tim, who has presented Sunday Brunch with Simon since 2012, did not expand beyond his presenting partner was “off”.

ED! has contacted a representative for Sunday Brunch regarding Simon.

And that soon transitioned into many supporters expressing their despondency at him not being on TV.

“Not the same without Simon #SundayBrunch,” one viewer claimed on Twitter.

My heart’s breaking how much I miss you!

Adding a crying face to their post, another wrote: “Bring back Simon!!!”

And someone else even tweeted directly at the 58-year-old: “My heart’s breaking how much I miss you!”

However, there were also some reactions that suggested absence might make the heart grow fonder – as not all viewers were very enthused about Miquita.

One such tweet read: “Something I thought I’d never hear myself saying… Missing Simon #SundayBrunch.”

Miquita’s inclusion on the show was a big hit for many viewers, with some even suggesting she should front the show full-time in future.

However, her presence was not acceptable to everyone. One viewer even claimed her involvement meant the series had ‘hit rock bottom’.

Nonetheless, while divided, the majority of the audience certainly seemed to enjoy having her on.

“Where’s Simon? But Miquita is excellent,” one person praised her on Twitter.

And a fourth echoed those thoughts by posting: “@miquitaoliver enjoying your fresh approach.”

Pushing to see her on the series again, one viewer pondered: “Can we keep Miquita? She’s on fire as always!”

“Please can @Miquiaoliver, replace Tim and Simon with immediate effect?” someone else agreed.

And yet another person chipped in: “Fantastic to see Miquita presenting today, there’s a much better energy to the show.”

But not everyone was entertained.

“Used to like Sunday Brunch. But Simon Rimmer’s replacement is cringeworthy. Hope she isn’t permanent,” one person grumbled.

And another complained: “Finally this programme has hit rock bottom. Don’t know any guests and don’t even know the the new Simon #SundayBrunch.”

Sunday Brunch airs on Channel 4, Sundays, from 9.30am.