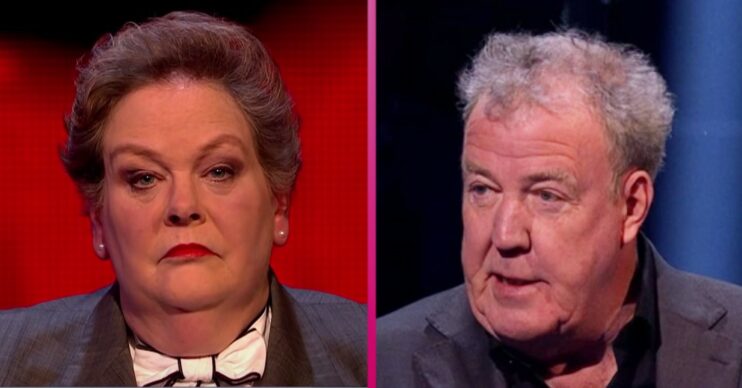 Who Wants to Be a Millionaire?: Jeremy Clarkson admits he doesn’t know who Anne Hegerty is

He wasn't familiar with Adil Ray, either

Jeremy Clarkson bemused ITV viewers last night (Saturday August 14) as he claimed not to be familiar with Anne Hegerty.

The Who Wants to Be a Millionaire? host also admitted he has no idea who Adil Ray is, either.

The surprising confession came as the ex Top Gear presenter was asked for assistance on a question about game shows.

What was Jeremy Clarkson asked about?

The baffling moment came as contestant Archit Israni used his ‘ask the host’ lifeline at the £4000 question mark.

Financial consultant Archit was unsure about the answer to: “Since 2016, who has hosted the TV game show that requires teams of five to name items in top 10 lists?”

Among the options as the answer were Warwick Davis, Phillip Schofield, Adil Ray and Anne Hegerty.

Archit pondered whether the question referred to Family Fortunes. But he was unsure who fronted the show after Les Dennis’ stint as host.

What did Jeremy Clarkson say about Anne Hegerty and Adil Ray?

Turning to Jeremy, Archit asked for a clue.

However, Jeremy couldn’t work out what show was being asked about – and thought it might relate to Family Fortunes, too.

What planet has he lived on?

But he was far from definite – and was unable to identify two of his fellow ITV stars.

Jeremy admitted: “I’ve never even heard of two of the people in this list… Adil Ray and Anne Hegerty.”

Many of those watching at home were incredulous that Jeremy didn’t know the two TV personalities, particularly The Chase star Anne.

“Excuse me did Jeremy Clarkson just say that he didn’t know who Anne Hegerty is?!?!?!?! #WhoWantsToBeAMillionaire,” typed a third.

And a fourth person seethed: “What planet has he lived on? Jeremy Clarkson how can you not know?”

Adil Ray Anne Hegerty Jeremy Clarkson Who Wants To Be A Millionaire?