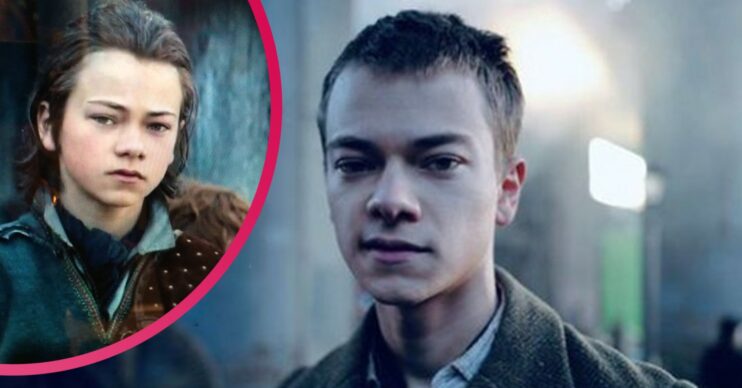 Who plays Tommy Shelby’s son Erasmus Duke in Peaky Blinders? What else has Conrad Khan been in?

He's already starred opposite Chris Hemsworth, and been nominated for a BAFTA!

Tommy Shelby introduces his illegitimate son Erasmus Duke to the rest of his family in Peaky Blinders this week – and it’s a pivotal moment for both the character and actor Conrad Khan.

While the role of Duke remains a mystery in the upcoming final episodes of Peaky Blinders on BBC One, there’s nothing uncertain about Conrad Khan’s future…

So how old is Peaky Blinders star Conrad Khan, and what have you seen him in before?

Here’s everything you need to know about the young actor.

Read more: Aneurin Barnard profile: What else has Peaky Blinders’ Dr Holford been in and how do you pronounce his name?

Duke is the son of Tommy Shelby from a one-night stand 20 years ago.

He appeared for the first time very briefly in episode 4, and also stars in episode 5 and 6.

Conrad says: “I was so nervous on my first day…

“I was sitting in my trailer, biting my nails reading my book, trying to distract myself.

“I have to kill someone in it and manhandled a few guns on set, which was quite fun.”

Conrad is an up-and-coming young actor who is very much on the trajectory to global stardom.

The London-born actor been performing since he was a child, and even appeared opposite Hollywood heavyweight Chris Hemsworth when he was just a teenager.

In just seven years of acting, Conrad has already worked on two huge movies, as well as securing a role in BBC One hit Peaky Blinders.

BAFTA even nominated Conrad for an award in 2021.

What else has Peaky Blinders actor Conrad Khan starred in?

He played the film’s protagonist Tyler, an introverted 14-year-old whose father is absent and whose mother struggles financially and emotionally.

Tyler has no prospect of escape – and is easy prey for drug dealer Simon to groom.

Conrad was actually 18 when he portrayed Tyler.

The actor’s first ever film role was in 2015 when he played Oskar in the TV movie Virtuoso, Alan Ball’s Pilot for HBO.

Conrad went on to play Dibbs in the 2019 Black Mirror episode entitled Smithereens – quite possibly our favourite episode of the series ever.

In 2021, Conrad Khan played Will Chambers in the second series of Baptiste.

That same year, he won the role of Duke in the BAFTA award-winning Peaky Blinders, opposite Cillian Murphy and Paul Anderson.

He says his dream role would be Batman or James Bond.

Before that, though, Conrad will star as Kribble in the upcoming film Kindling.

When and why was Conrad Khan nominated for a BAFTA?

Conrad was nominated for the BAFTA EE Rising Star Award in 2021.

He said at the time: “I feel really honoured to be nominated.

“Being nominated for a BAFTA is like a lifetime achievement.

“And for it to come at such a young age is really humbling.

“But, at the same time, it gives me energy.

“It’s the reason I get up every day.”

Conrad credits the film County Lines with changing his life.

He has said: “The film that changed my life was a film I made a few years ago, called County Lines.

“It’s one of the main reasons why I’m here today.

“The response that the film has got is better than anything I could have imagined.

“It was such an important learning experience for me.”

He added: “It’s really taken me places, and given me opportunities.”

How old is Conrad Khan and where is he from?

The actor is London-born, and was raised in the capital.

He’s the son of parents from Pakistan and Germany, and has one younger sister of school age.

His mother teaches fashion history and theory at Central St Martins and his father, who is half Pakistani, works in health policy.

Will Conrad Khan star as Duke in the Peaky Blinders film?

Although the exact details have not been confirmed as yet, we know the upcoming Peaky Blinders movie will have a young cast.

Creator and writer Steven Knight has teased that characters introduced in season 6 will appear in the upcoming Peaky film.

We know that Steven Knight will create a Peaky Blinders film to complete the franchise once season 6 ends.

Actors Cillian Murphy and Paul Anderson have been confirmed to appear in the film – whether in flashbacks or as part of the main plot is not yet known.

However, the rest of the cast has not yet been announced.

Peaky Blinders film – what we know so far…

In an interview with Esquire, Steven Knight said the new characters introduced in season 6 help to set up the plot for the Peaky Blinders film.

He described them as the “new generation”.

He explained: “In series six, we’re bringing in the new generation, and they are going to be part of what happens in [the] film.

“I think it’s finding those actors that you just watch and you think, there you go – there’s the future.

“The film, I know exactly what it’s about.

“And I know what two stories it’s going to tell.

“How the story will unfold, I don’t know.

“What will happen after that, I want that to depend on the film.”

He then added: “For all we know somebody is going to pop out – I think I know who it’s going to be.”

As well as the film, Steven has other plans for the franchise.

In a previous interview with Digital Spy, director Anthony Byrne said that Steven is planning a Peaky spin-off series with the younger cast members.

He said: “Steve wants to do a spin-off show featuring younger Peakies who we might see potentially coming to London and causing havoc and maybe getting involved with other gangs.”