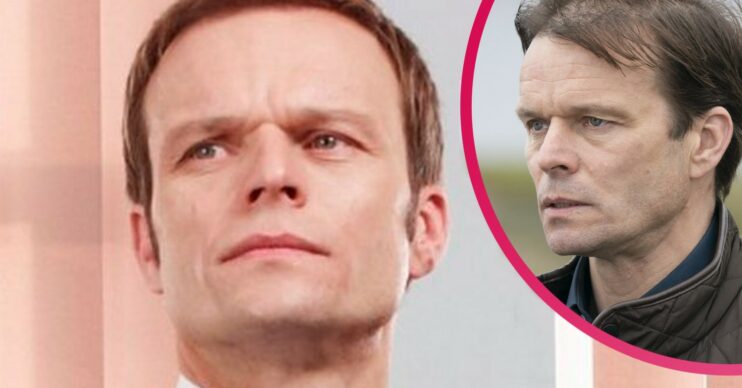 Waterloo Road fans will recognise him too!

Shetland continues on BBC One this week and viewers will know that Niven Guthrie is prime suspect – but what else has actor Alec Newman been in?

The character Niven is as fishy as an aquarium, but nowhere near as much fun.

Actor Alec Newman will be familiar to some viewers for his roles in Showtrial and Waterloo Road.

Here’s everything you need to know about Alec Newman and his dodgy Shetland character Niven Guthrie.

Niven is a prominent local businessman who appears to be somehow implicated in DI Jimmy Perez’s latest murder case.

Niven Guthrie had a big argument with murder victim Alex Galbraith just days before he died.

But did Niven do it?

What has Niven Guthrie actor Alec Newman been in before?

Alec Newman has been a jobbing actor for nearly three decades.

In 2000, Alec starred in arguably one of his most famous roles – that of Paul Atreides aka Muad’Dib in the TV mini-series Dune.

Three years later, he reprised the same role in the sequel Children of Dune.

He portrayed Euan Harries in Hope Springs, Robert Ludlow in Casualty, Kevin Cordero in 24, and King Aethelred in The Last Kingdom.

Waterloo Road fans will recognise Alec as Michael Byrne, a role he played from 2011 to 2013.

Other famous parts include Pavel Kuragin in Strike Back, Mark Tomlinson in Unforgotten, and Father Duncombe in Call the Midwife.

Alec recently played Giovanni in Love in Lockdown, and can currently be seen as “pervy professor” Stephen Vendler in BBC One drama Showtrial.

Michael arrived as the new Head Teacher in episode 11 of series seven, replacing Karen Fisher, who left at the end of the first term.

Rather than turning his back on teaching, he dedicated his life to successfully improving failing schools.

His tenure as head lasted until the end of series eight when he left for pastures new and was replaced by Christine Mulgrew.

How old is actor Alec Newman and where is he from?

Mark Alexander Newman was born on November 27 1974 in Glasgow, Scotland, but moved to Berkshire when he was four.

They married in Ayrshire in June 2014 after meeting on the set of Waterloo Road.

She was the production coordinator on Waterloo Road.

He has a brother, John James Newman, who appeared on The Voice UK in 2012 and got through to the Battles round.

He has written songs for Chesney Hawkes, Jo Cocker, and Kylie among others.

Shetland episode five airs on Wednesday November 17 2021 at 9pm on BBC One.